Difference Between Abdomen and Stomach

Key Difference: The abdomen is known as the part of body which lies between the chest (thorax) and the pelvis. The main function of the abdomen is to house the alimentary tract and organs that are responsible for absorptions and digestion of food. Stomach is one of the main organs that are located inside the abdomen. In vertebrates, the stomach is responsible for the second phase of digestion after mastication (chewing). The stomach also plays an important role in storing food.

The words ‘abdomen’ and ‘stomach’ are commonly misinterpreted and interchanged. These words are confusing to people who are not medical professionals, as they both seem similar in function and placement. However, both these words have different meaning and perform different functions. A stomach is a part of the abdomen. 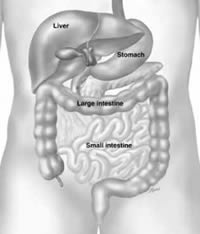 The abdominal and the pelvic cavities are lined by a serous membrane known as parietal peritoneum. This membrane joins the visceral peritoneum that lines the organs. The peritoneal fluid lubricates the organs that are suspended in the abdominal cavity. The abdomen is responsible for housing various organs in humans such as the digestive tract (stomach, small and large intestines and appendix), liver, gallbladder, urinary tract (kidney and ureters) and spleen.    Many important blood vessels travel through the abdomen, such as the aorta, inferior vena cava and small branches. The front of the abdomen is protected by a thin, layer of tissue known as fascia. In the front of the fascia are the abdominal muscles and skin, while the rear contains back muscles.

The main function of the abdomen is to house the alimentary tract and organs that are responsible for absorptions and digestion of food. The alimentary tract comprises the lower esophagus, the stomach, the duodenum, the jejunum, ileum, the cecum and the appendix, the ascending, transverse and descending colons, the sigmoid colon and the rectum. The various abdomen muscles (transversus abdominis, rectus abdominis and pyramidalis muscle) provide support, help in the breathing process and movement. They also serve as protection for the inner organs. Constant working and exercising of the rectus abdominus allows a person to achieve 6-pack abs. Exercise of the abdominal muscles is important as it contributes to the flexibility of the spine and a good posture. It also helps strengthen the muscles, which when weak can start to hurt and cause painful spasms or injuries. 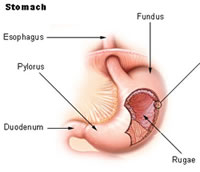 Stomach is one of the main organs that are located inside the abdomen. It is a muscular and hollow, dilated part of the digestive system that plays an important role in the alimentary system. The stomach is located on the left side of the upper abdomen and lies between the oesophagus and the duodenum (first part of the small intestine). In vertebrates, the stomach is responsible for the second phase of digestion after mastication (chewing). The stomach also plays an important role in storing food.

The stomach is a J-shaped organ in humans, but the shape of the stomach varies depending on the species. For example, the stomach of ruminants (such as cows, sheep, and buffaloes) is divided into four chambers - rumen, reticulum, omasum and abomasum. The location of the stomach in animals is relatively similar to humans. The size and shape of the stomach changes depending to the position of the body and the amount of food stored inside. It is about 12 inches long and is 6 inches wide. In human adults, the stomach has a volume of about 45 ml in a relaxed state. However, at an expanded stage, the stomach can hold about two to three liters of food. The stomach contains two sphincters that keep the contents of the stomach contained. The stomach also is surrounded by parasympathetic (stimulant) and orthosympathetic (inhibitor) plexuses (networks of blood vessels and nerves in the anterior gastric, posterior, superior and inferior, celiac and myenteric), which regulate both the secretions activity and the motor (motion) activity of its muscles.

The chewed food enters the stomach through the oesophagus via the oesophageal sphincter. The stomach then releases proteases (protein-digesting enzymes) and hydrochloric acid (which kills or inhibits bacteria) and provides the acidic pH of two for the proteases to work. The stomach churns the food through muscular contractions of the wall and reduces the volume of the fundus, before lopping around the fundus. The chewed food is converted into chime (or partially digested food) which is then sent to the small intestine via the pyloric sphincter. The small intestine is then responsible for extracting the nutrient from the chime. Though the main absorption of nutrients is done by the small intestine, the stomach can also absorb certain small molecules such as water, medications, amino acids, 10-20% of consumed ethanol and caffeine.

Certain creatures such as lampreys, hagfishes, chimaeras and lungfishes do not have stomachs at all, which results the food from the oesophagus going directly to the intestine. These animals consume food that requires little or no storage.