Difference between Akbar and Shahjahan

Key Difference: Akbar was the third Mughal Emperor to rule India. He was a supporter of arts and literature. Shahjahan was the fifth Mughal ruler and supported architecture and also build great monuments. 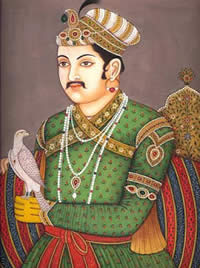 Akbar was born as Jalal-ud-Din Muhammad Akbar on 15, October 1542 in Umerkot, Sind to Emperor Humayun and Hamida Banu Begum. He was also known as Akbar the Great and was the grandson of the Mughal Emperor Zaheeruddin Muhammad Babur, who established the Mughal dynasty in India. Akbar was 13 years old when he ascended the throne after the death of his father Humayun. It is believed that Akbar could not read and write, though there are no records confirming this belief.

Akbar is praised for this military innovations as well as developing new tactics to maintain peace. He gave orders to being using Kitars alongside the Mughal Talwars during battle, along with manufacturing chain-plate armors and other protective padding. He also began utilizing cylinder rockets against war elephants, which were hard to beat before this. He was also the first to incorporate advanced swivel guns and cannons during battle. The reign of Akbar is known as a peaceful one with limited amount of resistance. He is also known to be a fan of arts, scriptures and literature. During his reign, Akbar commissioned translators to translate literatures from Sanskrit to Persian and Persian literature to Sanskrit. He also commissioned artists to paint murals and art on the palace walls.

Akbar also consolidated his power and brought the northern and central Indian realms directly under his power. Though in the beginning of his reign, he was intolerable to other religions, later in life he exercised tolerance towards all non-Islamic religions and even set up a place to have a series of religious debates with Hindus, Jains, Zoroastrians and Portuguese Roman Catholic Jesuits. His tolerance towards other religions played a big part in him unifying his empire, where he would marry Hindu Rajput princesses and allow them to maintain their religion, while giving their fathers a role at his court. Akbar also provided large grant amounts in order to build mosques, temples and churches in India. Akbar fathered three sons and had many daughters from over 30 wives.

Shahjahan was born as Shah ab-ud-din Muhammad Khurram on 5 January 1592 and was the third son of Emperor Jehangir and Rajput Princess Manmati, whose name is also recorded as Bilquis Makani in many Mughal chronicles. Shahjahan was the favorite grandson of Emperor Akhar the Great and remained close to him until Akbar’s death in 1605. Shahjahan stayed away from court politics following the death of his grandfather, while continuing his education and training. Shahjahan was engaged to Arjumand Banu Begum (Mumtaz Mahal) at the age of 15, but they were wed after 5 years. During his engagement, Shahjahan was known to wed a Rajput princess, whose name has not been recorded anywhere in the chronicles. 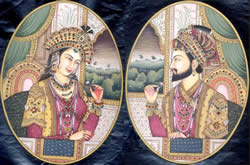 Shahjahan finally ascended the throne at the age of 35, after the death of his father in 1627. He was forced to openly revolt against his father in 1622 after his father’s twentieth wife Nur Jahan decided to wed her daughter from her first marriage to Shah Jahan's youngest brother Shahzada Shahryar and offer him support to the throne. Shahjahan lost the revolt against his father and was forced to submit unconditionally. Shahjahan’s faced troubles all throughout his reign from Sikhs, Portuguese, Rajputs, Persians, etc.  Unlike his grandfather who made alliances with the Rajput kingdoms, Shahjahan opted to capture the kingdoms by force. Shahjahan had an army four times greater in size than the army during his grandfather’s reign.

However, Shahjahan is also a patronage of the arts and his under his reign, India flourished in arts and architecture. The land revenue under Shahjahan was the highest than that of any other Mughal ruler. His famous Peacock Throne was taken during the Persian invasion in 1738, after which it disappeared, believed to be stolen or dismantled. Shahjahan loved architecture and had a huge part in the building various famous monuments during his reign. The most popular monument includes the Taj Mahal, which he built for his wife, Mumtaz Mahal, who died giving birth to Shahjahan’s fourteenth child. Other surviving buildings include the Red Fort, Jama Masjid, the Shalimar Gardens of Lahore, sections of the Lahore Fort (such as Sheesh Mahal, and Naulakha pavilion), and his Tomb of Jahangir. Shahjahan was overthrown and imprisoned by his third son, Aurangzeb, who succeeded him to the throne. Shahjahan fathered fourteen children with Mumtaz and one with the unnamed Rajput princess, of which only seven survived into adulthood, which included four sons.

nice it is intersting to read this.