Difference between American and British Accent The history behind these accents is quite fascinating. It is no secret that America was colonized by settlers from England in the 1600s. So it is safe to assume that the people had the same accent on both sides of the ocean. After all, the Americans at the time came from there. Hence, it is not surprising that they did in fact have the same accent, what is surprising is the fact that that accent was closer to the American accent of today, rather than the British Accent. However, it is to be expected that after almost 250 years of separation led to the development of different cultures, customs, and more importantly accents.

The main difference between the two accents is that the American Accent is easier to understand than the British Accent. It is also the most commonly used accent in the world; however, the British Accent is more idolized and considered to be sexier.

However, when speaking about the American and British Accents, it can actually be misleading to say ‘American Accent’ and ‘British Accent’. The reason for this is the fact that there are many different types of American Accents and many British Accents. The world is most familiar with an American Accent known as General American, which has been made famous my movies, TV shows, and interviews; however, there are other accents such as Boston, New York, Eastern New England, the Southern United States, and many more. 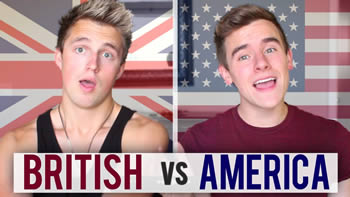 Similarly, the British Accent that most people have heard and are in love with is the Received Pronunciation. The others are Cockney, Estuary English (Southeast British), West Country (Southwest British), Midlands English, Brummie (Birmingham English), Northern England English, Geordie, Welsh English, Scottish English, and many more regional accents.

Comparison between American and British Accent:

Yes there are many British accents and many American accents and some British accents are more difficult to understand than most American accents. But British English as spoken by many people in the UK is neither easier nor more difficult to understand than American English. As for more common around the world: people in Europe are more likely to have been taught British English (albeit with exposure to American TV/Hollywood). Same with Africa. Of course English is one of the native languages in South Africa, and South African English is more akin to British English. Same in India - that's a lot of people. In China it's true that there is more exposure to American English. So in summary, on popularity and understandability, the article is misleading.