Difference between Atom and Molecule

Key difference: Atoms are the basic units that all matter is made of. Atoms are tiny, ranging from 0.1 to 0.5 nanometers in width. Each atom of any element is made up of protons, neutrons and electrons. Atoms of different elements come together to make molecules. This happens via a chemical reaction. A molecule is the smallest amount of a chemical substance that can exist. 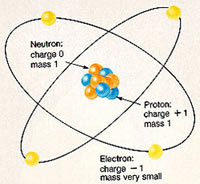 Atoms and molecules are the some of the introductory terminology always used in chemistry. Atoms are the basic units that all matter is made of. Atoms are tiny, ranging from 0.1 to 0.5 nanometers in width. They are so tiny that they cannot even be seen through a microscope. There are many types of atoms. Each atom has a unique name, mass and size. The different types of atoms are called elements.

An element is a pure chemical substance that has one or one type of atom, distinguished by its atomic number. The atomic number is derived from the number of protons present in the element’s nucleus. There are a total of 118 elements that have been identified, divided between metal, metalloids and non-metals. Each element has its own set of properties. Most elements are available on the earth, while a few have been developed artificially through nuclear reactions. An element is already in its rawest form and cannot be further broken down. All of the elements can be found in the Periodic Table, listed by atomic number.

Each atom of any element is made up of protons, neutrons and electrons. The protons and neutrons make up the nucleus of the atom and are situated in the middle of the atom. The nucleus is surrounded by a cloud of electrons which are bound to the nucleus by an electromagnetic force. The electrons have a negative charge which is how they are attracted to the nucleus, as the protons in the nucleus have a positive charge. Neutrons, on the other hand, do not have a charge.

Atoms of different elements come together to make molecules. This happens via a chemical reaction. For example: two hydrogen atoms and one oxygen atom combine to make a water molecule. 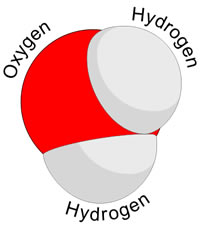 A molecule can have very different properties from the elements that it is made of. For example: water behaves very differently than either oxygen or hydrogen, even though it is made up of two hydrogen atoms and one oxygen atom.

Molecules are usually represented in a molecular formula. For example: O2, H2O, CO2, C6H12O6 (sugar). The molecular formula is the name of the element followed by the number of atoms of that element in the molecule.