Difference between Automotive and Automobile

Key Difference: Automotive is an adjective term that is related to or concerned with motor vehicles. Automobile is generally a North American term for a car which is a wheeled motor vehicle used for transportation of the passengers. It is driven on the basis of its own engine or motor. Both the terms may also be used interchangeably to denote any type of a motor vehicle. Automotive is typically regarded as an umbrella term to include anything pertaining to motor vehicles. In this way, automobiles (cars) form a part of automotives. 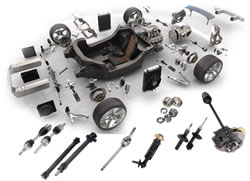 Automotive is used as an adjective that indicates something that is related to or concerned with motor vehicles (automobiles). An automobile can be expressed as a passenger vehicle that operates on ordinary roads and typically possesses four wheels. It is generally equipped with a gasoline or a diesel internal-combustion engine. Automotive as a term was earlier used in context to a self-propelled helicopter-like machine for one person. However, now the term is generally associated with any type of motor vehicle. Automotive is used as both a noun and adjective. It denotes anything that is pertaining to motor vehicles; anything that is propelled by a self contained motor, engine or anything like them. It is also used to refer to an industry or a store dipartment, etc, that specializes in automotive parts.

The modern era of automobile started in the year 1886 with the Benz Patent-Motorwagen, by German inventor Carl Benz. Its alternative name ‘car’ has supposedly originated from the Latin word carrus or carrum ("wheeled vehicle"), or the Middle English word carre ("cart") (from Old North French). Thus, automotive can be regarded as a umbrella term that includes all automobiles and automobile related attributes.

Comparison between Automotive and Automobile: