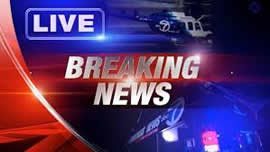 In order to increase channels viewer-ship, every broadcaster wants to be the first to show any important current event. News channels specially focus on delivering the latest information as soon as possible.  Reporting of any major current event has become very competitive and due to this breaking news and flash news have gained lots of popularity.

To understand flash news lets consider an example of a natural disaster which had taken place suddenly. The channels may not have the full details of the event but they want to provide the information of occurrence of this disaster to their viewers. They simply flash news stating that such an event has taken place. It is brief and sudden news. It may also contain alerts for the viewers.

Flash news is sudden therefore they are shorter whereas for presenting breaking news it is beneficial to gain details as much as possible. Breaking news is designed for creating immense interest for the viewers, so that the viewers do not switch to other channels. On the other hand, flash news is smaller and more sudden. The information has not many details with it but due to its relevancy the news is regarded as of great importance and it is flashed. A flashed news, after collection of relevant details is a potential candidate for breaking news. Covering of breaking story is also regarded as a big task therefore the channel ensures that most of the audience is able to watch their report. In order to do that, they often repeat telecast their breaking news. Information changes in the flash news takes place more rapidly than in breaking news.