Difference between Breathing and Respiration

Key Difference: Breathing is the process of inhaling oxygen from the air and exhaling carbon dioxide into the air. Respiration refers to cellular respiration where oxygen is reacted with glucose to produce carbon dioxide, water and energy.

Breathing is the process of inhaling oxygen from the air and exhaling carbon dioxide into the air. It is basically the process that moves the air in and out of the lungs. Aerobic organisms such as mammals, birds, etc. require oxygen to release energy in the form of the metabolism of energy-rich molecules such as glucose. MedicineNet.com defines ‘breathing’ as, “The process of respiration, during which air is inhaled into the lungs through the mouth or nose due to muscle contraction and then exhaled due to muscle relaxation.” In addition to exhaling carbon dioxide, breathing can also be used to rid the body of excess water from the body. Breathing is a physical process that is associated with inhalation and exhalation. The process of inhalation is believed to be an active process, while exhalation is considered as passive. Breathing can be broken down into two stages: ventilation and gas exchange. Ventilation is the movement of air in and out of our lungs, while gas exchange is the diffusion of gases between the alveolar gas and the blood in lung capillaries. In laymen terms, oxygen is infused in the blood, while carbon dioxide is diffused out of our lungs. Breathing is a voluntary action as it can be controlled. 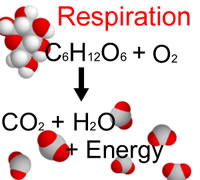 Respiration has two meanings one in physiology, while the other in cellular respiration. Respiration means the transport of oxygen from the air outside to the cells within the tissue and the transport of carbon dioxide from the lungs to the outside. The second definition refers to cellular respiration, a metabolic process in which cells breakdown the oxygen by reacting it with glucose to produce water, carbon dioxide and energy. There are two types of respiration: aerobic and anaerobic. Aerobic process involves oxygen, while anaerobic process does not include oxygen. Cellular respiration takes place in the cells, where glucose in the food reacts to the oxygen that is diffused in the cells to produce biochemical energy in the form of Adenosine triphosphate (ATP). Other nutrients that are used for respiration include amino acids and fatty acids. The byproduct of respiration includes water, ammonia, and carbon dioxide. Water and carbon dioxide is removed from the body through breathing, while ammonia and additional water is removed through urine. Cellular respiration is an involuntary process and cannot be controlled. It is also a necessary process in order to power the body and keep it alive.

The confusion often stems from the physiological definition of respiration as it is very similar to breathing. Hence, these words are often used interchangeably.

This is really helpful, thanks! :)

Can you please give the differences in a tabular column. It would be really helpful.

thanks .may youy live long