Difference between Capacitor and Battery 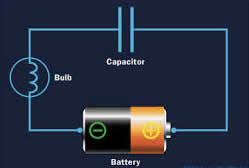 A capacitor consists of two conductors which are separated by a dielectric medium. It stores electrical charge and is capable of discharging it whenever required. It blocks Direct Current (DC) and allows Alternating Current () to pass through it. Therefore, they are widely used to extract AC components from DC + AC components. It is basically an arrangement of conductors. Capacitors are widely used in electrical circuits as energy-storage devices.

Capacitors are capable of storing electrical energy directly as an electrostatic field is created between two metal "plates". A capacitor is generally constructed using two metal plates or metal foils separated by an insulator called a dielectric material. This insulator prevents charges to move across the plates. Any non-conducting substance can be used as a dielectric material. However, porcelain, mylar, teflon, mica, cellulose are generally preferred. Thus, a capacitor can be defined as an arrangement of two conducting surfaces separated by a dielectric medium. One of the common applications of a capacitor can be found in a flash camera. A capacitor in a flash camera charges up and stores the electric charge. It releases the charge to a light bulb, and thus flash is created whenever the picture is taken. 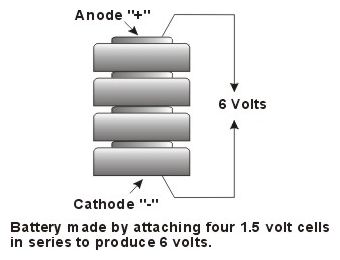 Battery is a device that consists of electrochemical cells that convert stored chemical energy into electrical energy. The battery was created in 1799. Originally, it was called the Voltaic battery. The first battery was created by using copper and zinc rings. The set up was placed in an acid solution that is known as the electrolyte. A battery has evolved since then. However, the basic mechanism remains the same till now. A battery consists of two ends namely cathode and anode. In a battery, the positive terminal is referred to as a cathode. On the other hand, anode is the negative terminal. The two terminals are connected in order to form a circuit. Electrons move through the wire and electricity is produced.

A modern battery zinc carbon is packaged in zinc that serves as a container as well as an anode. A carbon rod is used as a positive terminal. An electrolyte is used as a paste of zinc chloride and ammonium chloride dissolved in water. The electrons that move from anode are collected by the carbon and then are returned to cathode portion of the battery. A battery can also be explained as an assembly comprising of 2 or more cells connected in series to generate a voltage which is equivalent to the sum of the voltages of the cells.

Comparison between Capacitor and Battery:

Wow thanks a lot this article have helped me much :-D