Difference between Capacitor and Condenser

Key Difference: Capacitor is a device that is used to store an electric charge. It is basically an arrangement of conductors. Condenser is an old term for a capacitor. Therefore, there is no difference between a capacitor and condenser in electronics. However in other disciplines, condenser may also refer to a number of other things. For example – the term is also used to denote a device or unit which condenses a substance by cooling it. It refers to the change of state from its gaseous to its liquid state. ‘Condenser’ also denotes an optical system which concentrates light rays from a wide spread source into a narrow beam. 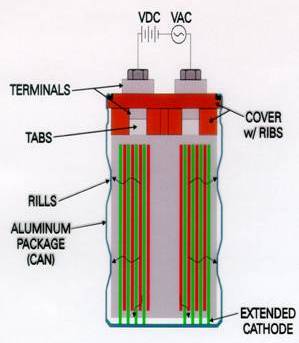 In the world of electronics, capacitor and condenser are the same. However, only few may encounter with the word known as condenser, as it is now an obsolete term. The capacitor was invented in the year 1746, by a Dutch scientist named as Van Mussenbrock. Initially, it was known be the name ‘Leyder Jar’, as it was made using a glass jar filled with water. This jar was charged with static electricity. This jar was capable of storing electric charge in a very small space, and hence the name ‘condenser’ was born.

Capacitor or condenser is a device that is used to store an electric charge. It is basically an arrangement of conductors. Due to its characteristics, a capacitor is widely employed in the formation of electronic circuits. Capacitor stores electrical energy directly, as an electrostatic field is created between two metal "plates". A capacitor is generally constructed using two metal plates or metal foils separated by an insulator known as a dielectric material. Any non-conducting substance can be used as a dielectric material. However, porcelain, mylar, teflon, mica, cellulose are generally preferred. A capacitor is defined by the type of dielectric and electrode material selected. It also defines the application of the capacitor. The dielectric material is the main substance that helps in storing the electrical energy.

Comparison between Capacitor and Condenser: