Difference between Character and Personality 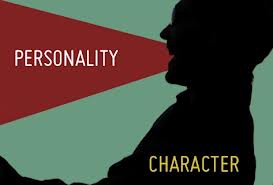 Character is closely related to moral and ethical values. It focuses on the traits that are unique to a person. Character and personality are often considered to be synonymous. Character is often regarded as the true self, meaning that it represents deep rooted attributes possessed by a person. One cannot disguise moral and ethical values from himself, and thus this is the closest set of features that is possessed by anyone. Character works with the aid of mind and feelings.

On the other hand, personality is often referred to as the mask identity of a person. It is reflected by the outer appearance and behavior that may or may not be true to inner character. Personality may be glorified with the use of various masks.  Personality is often developed in order to be as effective as possible. The relation between personality and character can also be expressed by considering personality as the finishing of character, if one wants to potray the real identity.

Comparison between Character and Personality:

This site is helpful.

I really enjoyed reading this. It has helped me to understand some key features about these two terms. Well done

This is the best explanation i've found on google.

Could you give more examples of sentences with the words "character" and "
personality" in which the described difference between the words is obvious and where one word cannot be substituted with the other.