Difference between Coyote and Wolf

Key difference: Wolves and coyotes are different species in the same genus, Canis. Coyotes are scavengers, omnivores, and predators of small to medium-sized animals. Wolves are bigger than coyotes and are better adapted to hunt larger animals. 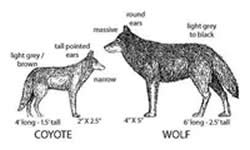 Wolves and coyotes are different species in the same genus, Canis. Coyotes are scavengers, omnivores, and predators of small to medium-sized animals. Wolves are bigger than coyotes and are better adapted to hunt larger animals.

The wolf is considered as one of the biggest members of the canine family and one of the most popular animals on the planet. It is one of the most well researched animals and probably has the most books written about it. It is the sole and direct ancestor of the dog and hence is able to breed with dogs to produce hybrids. It is currently classified as Least Concern to be extinct or endangered by the International Union for Conservation of Nature (IUCN), despite the fact that they have been despised and persecuted by most humans.

Coyotes are approximately the size of a medium-size dog; however, they tend to have to longer, thicker fur. Coyotes have a long, bushy, black-tipped tail. The tail is usually carried pointing down. Coyotes are most commonly found throughout North and Central America. Their range covers Northern Canada to Panama in the south. They are also known as the American jackal, brush wolf or the prairie wolf. As part of the genus, Canis, coyotes are also able to mate with dogs. 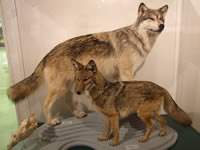 Coyotes are usually shy of humans and are non-confrontational. They tend to stay away from human habitats. However, as the human population is growing and expanding, humans tend to invade their habitats. Coyotes are extremely territorial and hence will confront the humans. As the chance encounters between humans and coyotes increase, coyotes are slowly loosing their fear of humans. However, coyotes rarely attack prey bigger than themselves; hence most adult humans are safe. Coyotes tend to pose more of a threat to livestock, such as sheep and chicken, and in some rare cases to human children and babies. These instances have led to prosecution of coyotes. Still, coyotes are currently classified as Least Concern to be extinct or endangered by the International Union for Conservation of Nature (IUCN).

Furthermore, some cultures such as Native American, First Nations, and Aboriginal feature a deity whose name is translated into English as "Coyote" in their traditional stories. Coyote often appears in creation myths and etiological myths, usually as a trickster, a culture hero or both.

A detailed comparison between the wolf and coyote:

"cultures such as Native American, First Nations, and Aboriginal" ... Really?