Difference between Cyclone and Tornado

Key Difference: Cyclones are considered as oceanic phenomena, while tornadoes can occur over land as well as water. A cyclone is generally defined in meteorology as an area of closed, circular fluid motion rotating in the same direction as the Earth. A tornado is a violent rotating column of air that is contact with both the ground as well as a cumulonimbus cloud.

Depending on the size and intensity of the cyclone, wind speed can range anywhere from 32mph to 157mph. Different types of cyclones include extratropical, subtropical, and tropical; cyclones can transition between these phases given the right conditions. Cyclones are considered to be as oceanic phenomena, as they can die out on lands due to loss of moisture, but they still manage to cause destruction due to wind and rain. A cyclone has a diameter on the scale of hundreds of kilometers and is comprised of several to dozens of convective storms. Cyclones can be determined using Pulse-Doppler radars and their strength can be determined using scales such as the Beaufort scale and Saffir-Simpson scale, though scales may differ according to countries. 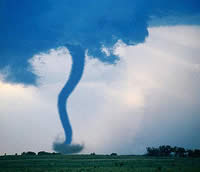