Difference between Diffusion and Effusion 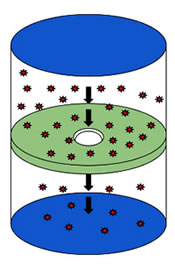 The terms diffusion and effusion are commonly used in many sciences such as chemistry, physics and biology. In chemistry these two terms are two properties of gases. These two are confusing for many people that are just learning the basics of gases and its properties. Diffusion and Effusion are two different terms that mean two different things and should not be used interchangeably. Diffusion refers to the ability of gases to mix with each other, while effusion refers to the ability of gas to travel through a small pin-hole. Diffusion is also used in sociology, economics and finance to refer to the diffusion of people, ideas and values.

Diffusion is the process by which molecules move and travel from one place to another without requiring bulk motion. Diffusion results in molecules moving or mixing by only using kinetic energy. The word ‘diffusion’ is derived from the Latin word "diffundere" meaning "to spread out". In diffusion, molecules are in a constant state of movement and when propelled by kinetic or thermal energy they tend to mix with other molecules resulting in an inseparable mixture. Let’s take a practical approach, one container is divided in A & B sections using a solid partition; the first section is filled with water, while the second section is filled with red dye. Now, when the partition is lifted the dye and water try to fill the whole container. Then the dye slowly taints the water red, this being diffusion. 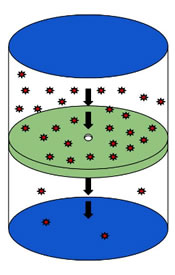 Effusion is the process by which molecules travel through a pinhole from a place of high concentration to low concentration. The process describes the ability of gas to travel through a small hole without collisions between molecules. This occurs when the diameter of the hole is considerably smaller than the mean free path of the molecules. The mean free path is the average distance traveled by a moving particle between successive collisions. A practical example of this would be to fill a container a bottle with smoke and poke a small hole in the bottle, the smoke that starts poring out of the hole is considered as effusion.

According to Scottish chemist Thomas Graham, who created the formula for measuring effusion has created a Graham Law that determines how fast the gas will travel and how it can be measured. According to Graham’s Law, the rate at which gases effuse is dependent on their molecular weight. The gas with a lower molecular weigh will effuse more quickly than a gas with a higher molecular weight. Effusion is calculated by measuring how many molecules pass through the hole in a second. Similarly, in thermodynamics the rate of effusion of a gas is inversely proportional to the square root of the mass of its particles.

Very good websites for the explanation