Difference between Diode and Zener Diode

Key Difference: A diode is a type of electrical device that allows the current to move through it in only one direction. It consists of an N-type semiconductor and a P-type semiconductor that are placed together. A zener diode is a heavily doped diode with a very narrow depletion region. It permits the flow of current in the forward direction and also in the reverse direction.

A diode is a two terminal device that consists of two active electrodes. A diode is allowed to transfer the current in only one direction between the electrodes. Thus, it can be described as an electronic component that tends to permit current flow in one direction. In addition to this, it also inhibits the current flow in the opposite direction. In other words, it is the simplest of the two terminal unilateral semiconductor devices.

The two terminals of the diodes are known as anode and cathode. It consists of an N-type semiconductor and a P-type semiconductor that are placed together. The cathode is the P-Type side, and anode is the N-Type. The functioning of all diodes is based on the same general principle; however there are different types of diodes that are suited to different applications.

Most of the diodes are formed from semiconductor materials like silicon. However, germanium may also be used sometimes. Diodes are often used for rectifying waveforms. There are various types of diodes. For example, a photo diode is the one which allows the current to flow when light strikes it. These types of diodes are mostly used as light detectors. A diode is also known as a rectifier. 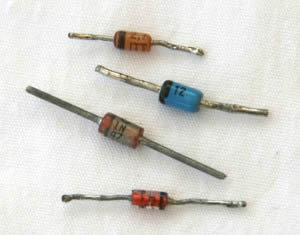 A zener diode is also a type of diode that allows reverse current to flow through it when the voltage exceeds the breakdown voltage known as 'Zener Voltage'. It is a heavily doped diode with a very narrow depletion region. These types of diodes use the beak-down properties of a PN junction. Due to its unique properties, it can also be placed parallely across a load and used as a voltage regulator. These diodes have very accurate and specific reverse breakdown voltages. Zener diodes do not obey Ohm’s law.

It is important to note that a zener diode works like an ordinary diode on forward bias. However, on reverse bias, leakage current starts to flow through the diode. This leakage current increases with the reverse voltage. At a definite reverse voltage, leakage current starts increasing suddenly. This particular voltage is known as the break down voltage of zener diode or the 'zener voltage'. The current that is increased suddenly is also referred to as a zener current. A zener diode can be easily distinguished from regular diodes by its code and breakdown voltage (Zener voltage) which are clearly printed on it.

Comparison between Diode and Resistor: