Difference between Eagle and Hawk

Both eagles and hawks are large birds of prey. They both belong to the Accipitridae family of birds. They are usually hard to differentiate at distances; however there are some significant differences between the two.

Eagles are known for their larger size, powerful build, and a heavier head and bill. Eagles are considered to be larger than any other birds of prey, except vultures. Hawks, on the other hand, are widely distributed and vary greatly in size. They are known for their sharp beaks, strong claws, long tails, powerful and curved beaks, and their ability to soar for great lengths of time.

Eagles grab their prey without landing and take flight with it so the prey can be carried to a perch and torn apart. Hawks tend to hunt by sudden dashes from a concealed perch in trees. Hawks are considered to be among the most intelligent birds. 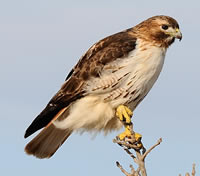 Eagles are more likely to scavenge than hawks and have the ability to prey on larger animals than hawks, mainly due to their size. Also, eagles are classified into two different types of categories: land eagles and sea eagles. The latter tend to prefer coastal habitats and prey on fish and other marine life. Hawks usually reside in wooded areas.

Eagles have been long considered as symbol of power, courage, and majesty. They have been featured as the emblem of the Roman Empire, in the Great Seal of the United States and as a symbol by czarist Russia. It also appears on flags or the coat of arms of many countries, including Albania, Austria, Ecuador, Germany, Mexico, Poland, and Spain.

A detailed comparison between Eagles and Hawks:

Great information! Saw a hawk a few days ago. Big enough for me to worry about my 12 lb dog. Yikes .. magnificent creature....

Good, I can use these facts for my Project. Thank you.

thanks, my friend now (finally!!!) knows the difference between the two species of bird, and that they're not 'the same thing'.

I came to this site to find out whether it was an eagle or a large hawk that came face to face with me at my 21st floor apartment overlooking the Don Valley NorthYork. It was definitely large and the coloration was gold and black/brown patches on his back. Lets just say that I was glad to have a glass door between me and this big boy. He blinked and floated away.

My favorite bird of prey is a golden eagle.

Awesome, I learned a-lot from this.