Difference between Earth and Pluto 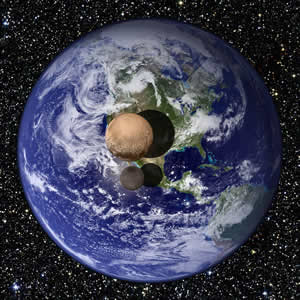 In comparison, Pluto’s surface is covered two-thirds by rock, and one-third by water. In fact, at times the dwarf planet also has an atmosphere and it rains. When Pluto is closest to the Sun during its orbit, the ice on its surface thaws and forms a thin atmosphere mainly of nitrogen. It also contains a thin methane haze about 161 kilometers above the surface. When this haze is hit by sunlight, the molecules get converted into hydrocarbons that fall to the ground and coat the ice with a dark covering. As Pluto travels away from the Sun, this temporary atmosphere then freezes back to its solid state. 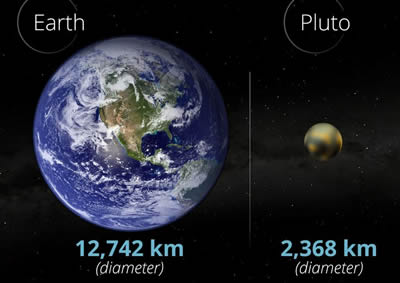 Additionally, the Earth has only one moon, named Moon or less commonly Luna, whereas Pluto has 5: Charon (the largest), Hydra, Nix, Kerberos, and Styx. Also, Pluto is only about 18.5% the size of Earth and its orbit lasts 248 years, whereas earth’s orbit is 365.26 days. Pluto’s orbit is also on tilted, whereas Earth’s is not. Earth’s orbit is elliptical with the sun in the center and Pluto’s orbit is oval shaped and does not have the sun in its center. Pluto is also located much farther from the Sun, then the Earth; which is why it is mostly frozen, unlike Earth.

Comparison between Earth and Pluto:

thanks so very helpful!!!!