Difference between Effected and Affected

Key Difference: Effect is the result or outcome of a cause. On the other hand, affect is to have an influence on or to alter. It also means to aim for; to act in emotions; or to try to obtain. 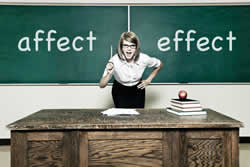 There is often confusion over the words: effect and affect. In order to understand which to use and when it should be used, one must know the difference between a noun and a verb. This is because effect is a noun; whereas, affect is a verb. However, there are tricks to get around this. 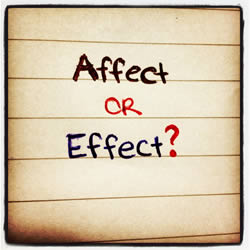 Effected is usually a noun and it is the outcome of anything. Effect is something that produces or creates something specific. A good synonym of effect is ‘result’.

Some of the examples of effect are given below:

Affect is a verb and it is something to change or influence. Affect also is to refer to feelings and desires as factors in thought or conduct.

Some of the examples of affect are given below:

Since, affect and effect generally stick to specific grammatical roles; readers can often know which one to choose by identifying the word's purpose in a sentence.

When one AFFECTS something, one produces an EFFECT on it.