Difference between Epidemic and Pandemic

Key difference: An epidemic is where there are numerous breakouts of a single disease. A pandemic, on the other hand, is when the disease starts to spread on a larger scale than an epidemic. A pandemic is essentially a bigger epidemic. 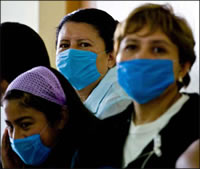 There is a very minor difference between epidemic and a pandemic. An epidemic is where there are numerous breakouts of a single disease. A pandemic, on the other hand, is when the disease starts to spread on a larger scale than an epidemic. A pandemic is essentially a bigger epidemic.

Dictionary.com defines epidemic as a disease “affecting many persons at the same time, and spreading from person to person in a locality where the disease is not permanently prevalent.” Wikipedia states that “an epidemic occurs when new cases of a certain disease, in a given human population, and during a given period, substantially exceed what is expected based on recent experience.”

Essentially, an epidemic is when there are a number of reported cases of a single disease in a localized area. An epidemic can be brought on by changes in the ecology, a new strain of viruses, or by introducing a virus in a new area where it did not previously exist. Epidemics may be restricted to a single location, such as one city, or a locality, or a state. However, if the outbreaks start to spread into wider areas before the disease can be contained, then it turns into a pandemic.

According to Dictionary.com, a pandemic is defined as, a disease “prevalent throughout an entire country, continent, or the whole world; epidemic over a large area.” Wikipedia states that “a pandemic is an epidemic of infectious disease that has spread through human populations across a large region; for instance multiple continents, or even worldwide.”

Essentially when an epidemic cannot be contained and it spreads to other cities to states, or even to the whole country or worldwide, then it is termed as a pandemic. There have been numerous instances of epidemics and pandemics. Some of the better known pandemics include smallpox, tuberculosis, the Bubonic plague or the HIV pandemic of 1918.

An example for better understanding the difference between an epidemic and a pandemic is the recent H1N1 outbreak in 2009, better known as swine flu. The swine flu started in Mexico City and quickly became an epidemic and spread throughout North America. However, when the flu was also found in New Zealand, Israel, Scotland and many other countries; it became a pandemic.

However, one should note that a pandemic does not necessarily mean millions of deaths. It just means that it is a geographically widespread epidemic.