Difference between Gorilla Glass and Sapphire

Key Difference: Gorilla Glass and Sapphire are two types of protective coverings that reduce the possibility of screen breakage. Gorilla Glass is a type of alkali-aluminosilicate sheet toughened glass, while Sapphire Glass is in fact a crystalline sheet made out of commercially developed sapphire. 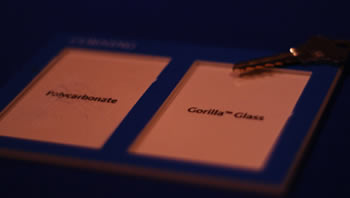 Anyone who owns a smartphone lives in perpetual fear to scratching and/or breaking their phone’s display screen. It is not even funny how easy it is to break a display screen, just one fall and the screen is gone. That was the case, however latest developments have released a protective covering for smartphones that reduce the possibility of screen breakage. Gorilla Glass and Sapphire are two such protective coverings.

Gorilla Glass is a type of alkali-aluminosilicate sheet toughened glass, which means that it is made by immersing the glass sheet in a molten alkaline salt bath. Gorilla Glass was created by Corning Inc. and was first launched in 2007. Corning started developing Gorilla Glass in 2005, in response for Apple Inc. asking for a type of toughened glass thin enough which could be used in consumer electronics, such as its new iPhone. Gorilla Glass was modifies from Corning’s "Chemcor" glass which was created in 1960.Currently, Gorilla Glass is used as the top covering on the display screen of numerous electronics such as smartphones, DVD players, mobile gaming consoles, MP3 players, etc. Its main advantages are thinness, lightness, and damage-resistance.

Sapphire Glass is actually not a glass at all; it is in fact a crystalline sheet made out of commercially developed sapphire. Sapphire is a type of gemstone that occurs naturally. It comes in various colors, red, green and most popular, blue. However, the natural color of sapphire is clear, and it takes on other colors due to impurities.

The process of creating sapphire artificially was developed in 1905. Sapphire crystals are created by applying high heat to purified aluminum oxide in a cylinder called a boule, which is then sliced into thin wafers and polished to gain the appearance of glass. However, this process of polishing can introduce flaws into the glass. Still, Sapphire glass is considered to be the hardest material in nature after diamonds. It is also more sensitive to the touch than other screen protectors. It is currently used in LED lighting, high-end jewelry and military equipment such as submarine and rocket windows. 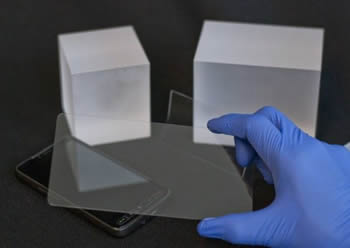 Sapphire Glass is considered to be much stronger than Gorilla Glass, however, according to Corning Corporate Controller Tony Tripeny, “It’s about 10 times more expensive. It’s about 1.6 times heavier. It’s environmentally unfriendly. It takes about 100 times more energy to generate a sapphire crystal than it does glass. It transmits less light which it means either dimmer devices or shorter battery life. It continues to break. I think while it’s scratch resistant product it still breaks and our testing says that Gorilla Glass, about 2.5 times more pressure that it can take than Sapphire on. So when we look at it, we think from an overall industry and trend that is not attractive in consumer electronics.”