Difference between HB and 2B Pencil

A Pencil is a popular tool used for writing as well as drawing purposes. Pencils were discovered in England, 1565, where rods of graphite were used to mark sheep while counting, and by 1970, the rods with wooden covering i.e. pencils were developed.

Pencils are made of wood with a graphite core inside; it is actually the combination of clay and finely grounded graphite, mixed with water and pressed together at high temperatures to make thin pencil rods. This process was developed by Nicolas-Jacques Conté, a Frenchman, in 1795, and it is still the widely used method by the pencil manufactures. By this process, manufactures started to label pencils according to their hardness; they were distinguished into four grades, and according to the numerical grading system, 1 was for being hardest and 4 was for being the softest. However, this grading system proved to be inconsistent and confusing, it was upgraded and changed to the “HB” system. 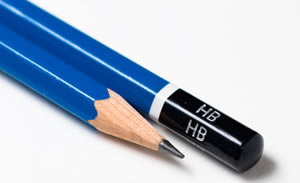 In the term ‘HB’, H stands for ‘hard’ which is designated for hard leads, and B stands for ‘black’ which is designated for softer leads. It is a universal term printed on all pencils. It means that the pencil is hard and black, and also depicts the hardness and nature of the lead used in a pencil. With varying ranges, shades and hardness of the pencils, terms such as 9H and 9B are used, where 9H is the hardest lead and 9B is the softest lead used in pencils.

The HB pencils come in the middle range of the shade chart. They are known to be standard, and hence are the preferred grade for general writing purposes. It is one of the most popular in the lead hardness categories. It has a good tensile strength, and a smooth feel while writing. The HB pencil has a limited amount of clay, which gives it a medium line density when used, and it is mediocre in shade. It is easy to erase, which is why it is used by children to improve their 'penmanship' in school. 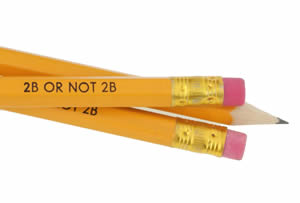 Along with the HB grading system, there is also a BB grading system in use. Here, the term “BB” stands for successively softer leads. Soft pencils are known to give darker shades. Also, depending on the shade, pencils are numbered according to the color of the different shades. They make dark lines with heavy density. They give a fairly darker shade, which makes it hard to erase and leave their mark on the paper. These pencils contain a small quantity of clay which makes the lead soft and ideal for bold or thick writing. It makes letters easier to read and have a smooth feel while writing. It is popular and widely used by artists for their sketches and paintings.

All these different grading systems used just for pencils sure makes no sense and is simply confusing, however these grading systems make it easy to pick and choose the right pencil when required.

Comparison between HB and 2B pencil:

Thank you. it help me very much