Key difference: HTC First is the first phone that will be released running on the Facebook Home user interface. The phone will be powered by a Qualcomm MSM8930 Snapdragon 400 1.4 GHz Dual-core Krait and a 1 GB of RAM. The Sony Xperia L is a mid-range smartphone. It features a 4.3-inch screen with a resolution of 854x480px and a scratch-resistant cover glass. It runs on Android 4.1 with a Dual-Core 1GHz Qualcomm MSM8230 chipset and 1 GB of RAM.

The Sony Xperia L is a mid-range smartphone launched by Sony. It features a 4.3-inch screen with a resolution of 854x480px and a scratch-resistant cover glass. It runs on Android 4.1 with a Dual-Core 1GHz Qualcomm MSM8230 chipset and 1 GB of RAM. It also has all the bells and whistles, including Wi-Fi, Bluetooth and 3G HSPA connectivity, as well as NFC support. The NFC is integrated with a one-touch connection to external displays in order to allow for big screen playback of videos or photos. The phone does not however have LTE capability.

Still, its saving grace has to be its 8 MP camera, which uses Sony's latest mobile Exmor RS sensor and offers a built-in HDR mode for both stills and video. The Exmor RS sensor is supposed to improved clarity and color reproduction, while the HDR mode will allow for better pictures in various different kinds of lights. 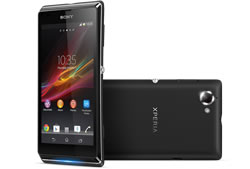 The phone is powered by a 1900mAh battery and has a battery STAMINA Mode for optimizing power consumption. The phone is available in three colors: white, black and red. It also has an LED light on the bottom of the phone that can be customized to blink different colors to indicate an incoming phone call, a missed call or text message. The light can also be programmed to blink in correspondence with the rhythm of the song played on the built in Sony Walkman music player.

The phone also comes with pre-installed Sony apps called Walkman, Album, and Movies. These are part of a pre-loaded software suite that allows for consuming and sharing a vast library of multimedia content.

The information for the detailed table about the two phones has been taken from the HTC website, the Sony Mobile website, theverge.com and GSMArena.com.