Kindle, an e-book reader, is developed and marketed by Amazon.com. The release date of the Amazon e-book reader device was November 19, 2007. An e-book reader is essentially a mobile electronic device whose main use is for reading digital e-books and periodicals. The word Kindle was taken from the context of ‘kindling a fire’. 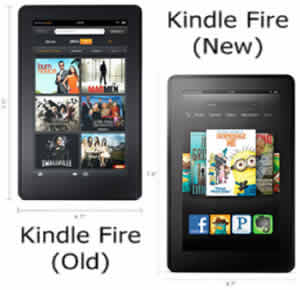 Kindle Fire is basically a LCD tablet computer, which was released on November 15, 2011. It follows the similar brand name of Amazon Kindle, but the features are totally different from the basic Kindle e-book reader. Kindle Fire is well-advanced; it is great for images, video and shorter reading sessions.

The Kindle Fire 1st Generation called Fire OS 1 was released on September 28, 2011. It has a touch screen display with IPS color. It does not have any 3G application, but can only access Wi-Fi. It also lacks a microphone, camera and SD card reader.