Difference between Leech and Slug

Key difference: Both, Leeches and Slugs are elongated-slimy creatures, but vary in their habitats. Leeches are relatives of earthworms, and mostly feed upon the blood of other creatures, whereas Slugs belong to mollusks, which is why their structure resembles that of snails, but lacks the outer shell or a tough covering.

Leeches and Slugs are similar invertebrates, but differ in their places of dwelling. A leech is an Annelid or segmented worm, which lives according to its category, whereas a slug is a Mollusk, which lives and survives wholly on plants. 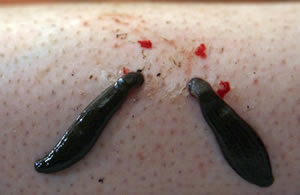 Leeches are worms, belonging to phylum Annelida and subclass Hirudinea. They are commonly called blood suckers and are applicable in medical fields and therapies. They do not possess the setae or bristles for locomotion, and hence their movement is conducted via the contraction and relaxation of muscles. Their bodies are solid, as the spaces in their coelom are dense with connective tissues. They also have two suckers, one at each end. The reproduction in leeches is the same as that of earthworms, except that the sperms are stored in spermatophores, which are sacs outside the body of the leech. As leeches lack setae, they move with the help of the anterior and posterior suckers and longitudinal muscles along the length of the body. The species hematophagus, feed on blood, and hence are used in medicines. 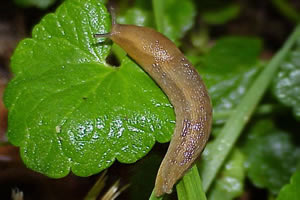 Slugs are common shell-less terrestrial gastropod Molluscs, which do not consist of the hard covering shells. They belong to Phylum Mollusca and class Gastropoda. They basically live on land and sea. One of the freshwater slug genuses is Acochlidium. Slugs are known to undergo ‘torsion’, i.e., 180° twisting of the internal organs during their development stages. They have soft and slimy bodies, which are prone to desiccation. Hence, land-living slugs are confined to moist climate and environment, and are supposed to retreat to their hiding places when the climate is dry.

Commonly, leeches are annelids that are segmented worms, whereas slugs are mollusks which are totally dependent on plants for their survival. Leeches have their importance in the medical fields, such as in Hirudotherapy. Whereas, a slug is a gastropod and can survive on both land as well as the sea. Slugs are similar to that of the snails, but do not have the outer covering. Leeches are segmented in their body, whereas the bodies of land slugs appear more or less symmetrical, except for the positioning of the pneumostome.

Comparison between Leech and Slug: