Key Difference: LG Optimus G Pro has major updates to its predecessor, the LG Optimus G. The device sports a massive 5.5-inch True Full HD IPS touch screen with multi-touch capability and a pixel density of 401 ppi. Under the hood, the phone is powered by 1.7 GHz Quad-core Snapdragon 600, making it pretty fast and speedy. Samsung has now expanded its’ offerings in the phablet category by introducing the Samsung Galaxy Mega 5.8 and Samsung Galaxy Mega 6.3. The Samsung Galaxy Mega 6.3 is named such because of its 6.3 inch TFT capacitive touchscreen with a resolution of 720 x 1280 pixels. The phone is powered by a Dual-core 1.7 GHz Cortex-A15 processor with a 1.5 GB RAM. 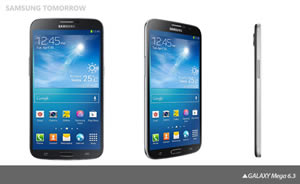 The Samsung Galaxy Mega 6.3 is named such because of its 6.3 inch TFT capacitive touchscreen with a resolution of 720 x 1280 pixels. The phone is powered by a Dual-core 1.7 GHz Cortex-A15 processor with a 1.5 GB RAM. The phone runs Android 4.2.2, the latest version of Android at the time of its launch. The phone also features an 8 MP primary camera and a 1.9 MP secondary front-facing camera.

The information for the detailed table about the two phones has been taken from theverge.com, engadget.com, samsungmobilepress.com, samsungtomorrow.com, gdgt.com and GSMArena.com.