Difference between Liquid and Aqueous

Key Difference: Liquid is a state of matter that has no fixed shape but has a definite volume. An aqueous solution is a solution in which a substance is dissolved in water.

Solid, liquid and gas are three primary states of matter in which objects can be found on Earth. Almost all substances can be found in either one of these three states. Water is the best example that can be used to describe states of matter as it can be found abundantly in all three states, ice (solid), water (liquid) and vapor (gas). Aqueous is another term that is used in science, which refers to a substance that is dissolved in water. Though liquid and aqueous are both liquid in state, they are completely different from each other and should not be used interchangeably.

Liquid is a state of matter that has no fixed shape but has a definite volume. Liquid is made up of tiny particles of matter such as atoms and molecules that are held together by chemical bonds. Liquid shares many characteristics of both states such as similar to gas it is free-flowing and can take the shape of the container it is placed in, however unlike a gas it cannot fill every space of the container. The density of liquid is closer to solid than gas and both are termed as condensed matter. A distinctive property of the liquid state is the surface tension that results in wetting objects when dipped into it.

Liquid particles are bounded firmly but not rigidly, which gives it the ability to flow. They are also able to move around one another freely, with limited particle mobility.  The transformation of liquid to other states has to do with its molecules; as liquid is heated the molecules increase in vibrations and movement causing them to create greater distances between them. During solidification, as the liquid is cooled, the molecules come together and form a specific order, known as crystallizing. The bonds between them become more rigid and stronger. Water is the most abundant liquid on the Earth and is considered a necessity for sustenance of life. 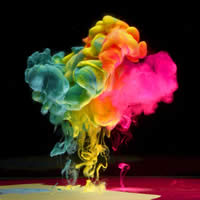 An aqueous solution is a solution in which a substance is dissolved in water. The substance known as solute is added to water, which is known as solvent in this case as it is in a greater quantity. All aqueous solutions include water as the solvent and are liquid in form. NaCl (aq.) is the most commonly known aqueous solution, where normal table salt is added to water to form a solution. The form is denoted as aqueous with addition of (aq.) to the name. Substances are divided into two forms, hydrophobic or hydrophilic.

A hydrophobic substance (water-fearing) is a substance that does not dissolve in water, while a hydrophilic substance (water-loving) is a substance that dissolves in water. According to their definitions, acids and bases are aqueous solutions. The ability of a substance to dissolve in water is determined by whether the substance can exceed or match the strong attractive forces that are generated by water molecules. If the substance does not dissolve it water, it forms a precipitate. Aqueous solutions with strong electrolytes can conduct electricity and are efficient conductors, while solutions with weak electrolytes are poor conductors of electricity. Substances that are good conductors are completely ionized in water, while poor conductors only show a small degree of ionization. Examples of aqueous solutions include household bleach, blood, paint and milk.