Difference between Mixture and Compound 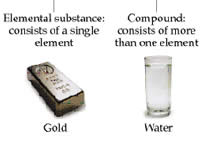 Matter is primarily classified into pure substance and mixture. Compound and elements fall into the group of pure substances. Element is the simplest of all the substances as it cannot be disintegrated or separated into simpler substances. For example, aluminum and oxygen are two elements.

Compounds are formed by the chemical joining of two or more elements. It is important to mention that in a compound, the elements do not retain their individual properties. The composition of compounds is expressed by chemical formulas. Water is an example of a compound. 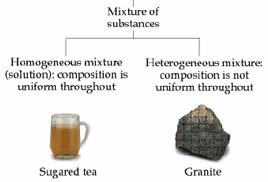 On the other hand, mixture is made up of two or more substance which are joined but not chemically like in the case of compounds. As no chemical joining occurs, no chemical reaction takes place between the substances forming the mixture. Unlike compound, the components of the compound do not drop their original characteristics. The components may be present in any proportion but still they can be usually differentiated visually in a mixture.

Properties of a mixture depend upon the properties of individual compounds. Physical methods like evaporation, crystallization, or filtration are used for separating the components of a mixture. There are two types of mixtures – homogeneous and heterogeneous. Homogenous mixtures are also known as solutions. In this type of mixture, the composition is uniform throughout the mixture. On the other hand, in heterogeneous mixture, the composition is not same throughout the mass.

Therefore, mixtures and compounds are two different types of matter. Mixtures can be made by varying the composition, whereas compounds are always formed with definite composition. In mixture, substances are not chemically joined like in the case of compound. In a compound, the individual substances can only be separated by using chemical reactions, whereas physical methods can easily separate the components of the mixture.

Comparison between Mixture and Compound: