Difference between Outsourcing and Contract

Key Difference: Contract is a binding agreement which is enforceable by law. It exists between two or more parties. Outsourcing involves transferring some of the tasks to the outside company and generally makes use of a contract which is agreed by the involved companies. 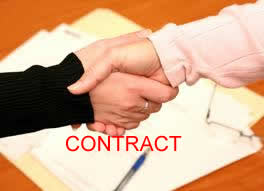 Contract is a type of commitment which is made regarding a course of action. The most important ingredient of a contract is terms and conditions which are understood by the parties involved in a contract. The amendments may also be made in order to get to the agreeable contract accepted by all the parties involved in the contract. It establishes agreements in business, and therefore plays a vital role in the economic sector.

Contracts are widely used in supply chain management. Contracts are legal agreements and therefore are enforced by law. A company can make use of a contract in order to take the services of other company for technical support, etc. Some of the essential elements of a valid contract are – mutual agreement, free and genuine consent, lawful consideration, necessary legal formalities, etc. 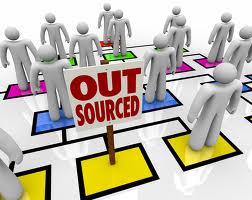 A company may decide to carry the core activities on its own and outsource rest of the activities to the companies who are more skilled in those activities. It provides a good option for the company for cost cutting, as it is often calculated that if those outsourced activities were to be carried out by the company itself then it may have to spend more.

Outsourcing involves transferring some of the tasks to the outside company and therefore it generally consists of a contract which is agreed by both the companies. Both the parties are legally bound to all the terms and conditions mentioned and agreed in the contract. Outsourcing is an arrangement, whereas contract is a legal agreement, which is generally used to denote the document on which the contract is expressed in words.

Comparison between Outsourcing and Contract: