Difference between Planets and Moons

A planet is a large object that orbits around a star or a stellar remnant. This is mainly due to its own gravity and gravity of the star that allows the planet to have an orbit around the star. The orbit is usually elliptical in shape, mainly depending on the gravitational force of the planet and the star.

Also see the difference between Earth and other planets.

As per the International Astronomical Union (IAU), “A "planet" is a celestial body that: (a) is in orbit around the Sun, (b) has sufficient mass for its self-gravity to overcome rigid body forces so that it assumes a hydrostatic equilibrium (nearly round) shape, and (c) has cleared the neighbourhood around its orbit.”

Hence, as per this definition, there are currently eight planets in our solar system: Mercury, Venus, Earth, Mars, Jupiter, Saturn, Uranus, and Neptune, in order of distance from the Sun.

Also see: The difference between asteroids and planets 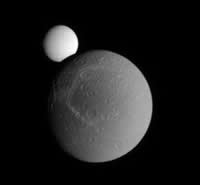 These natural satellites can range in sizes, some are bigger than planets. For example, Ganymede, a moon of Jupiter and Titan, a moon of Saturn are bigger in size than Mercury, which is a planet. Furthermore, it is not necessary that all planets have moons or have one moon: Mercury and Venus do not have moons at all; Earth has a single natural satellite, which we call, the Moon; Jupiter and Saturn have more than 50 to 60 moons; Neptune and Uranus have more than 20 moons; even Pluto, Haumea, and Eris, which are considered as minor planets or dwarf planets have various moons, Pluto has five known moons. Furthermore, there are more natural satellites being constantly discovered.

As of January 2012, there are 176 known moons orbiting six of the eight planets, eight orbiting three of the five dwarf planets, and there are 76 asteroids located in the asteroid belt, between Mars and Venus, that have satellites orbiting them. Many of these satellites are believed to be capable of sustaining life. Some have proof of ice and water, while Titan even has an atmosphere.

Also see the difference between earth and moon gravity

Technically speaking a moon is a plane. There is no scientific definition of what a moon really is. Since both the Moon and the Earth have a pull of gravity, both acting on one another, they are basically orbiting each other. Because of this, The path the two masses make around the sun is at its center of mass, Which in this case, would be between the Moon and the Earth. So what stops the Moon from being a smaller planet, in orbit with the Earth?