Difference between RAW and JPEG

Key Difference: RAW is the raw image that the camera shoots. It saves all the data and the information for the image, with minimum processing. JPEG stands for Joint Photographic Expert Group. It is the most commonly used format for photographs. JPEG is specifically good for color photographs or for images with many blends or gradients. 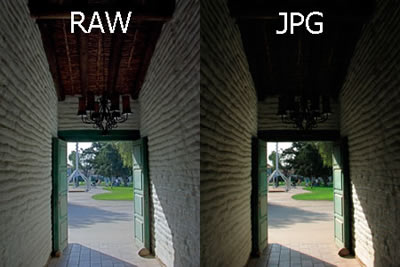 RAW is the raw image that the camera shoots. It saves all the data and the information for the image, with minimum processing. The name raw comes from the fact that the image is basically the raw image that the camera captures. This is before all the processing is applied to it, such as white balance, contrast, etc. It is basically you get what you see image. It tries to capture the image, as the original photographer saw it in person.

RAW preserves all the information in all the pixels within the image. However, due to this RAW files are therefore significantly larger than the JPEG files, because they are retaining more data. Once the image is processed, it can be converted and saved into other formats, such as JPEG, BMP, TIFF, etc.

Once a camera captures an image directly in JPEG, it is usually processed to some extent to better fit the image. Excess information, and data is deleted, and the user has no access to this data later. JPEG stands for Joint Photographic Expert Group. It is the most commonly used format for photographs.

JPEG is specifically good for color photographs or for images with many blends or gradients. However, it does not have the best with sharp edges and might lead to a little blurring. This is mainly because JPEG is a method of lossy compression for digital photography. This means that while saving the image in a JPEG format, there is a slight loss of quality due to compression. Hence, JPEG is not the greatest format in case one needs to keep making numerous edits and re-saves to the image. As with each re-save there a slight loss of quality due to compression. 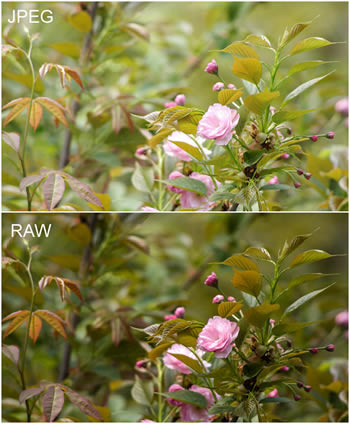 RAW, however, does not face this issue, as all data is saved and none is lost. Hence, one can make as many changes to it as they want and as often as they want. Similarly, a RAW image can be reset if one does not like the changes made, this will revert the image to its original form with all the original data restored. Once a JPEG is edited and save, it is nearly impossible to go back to the original image, unless the use had saved a copy of the original.

RAW images are saved in a different proprietary format, which means that the format may differ depending on the camera model and company. The RAW format for Canon cameras is .CR2, while for Nikon it is .NEF. Sony saves in .SR2 or .SRF. Hence, it may be impossible to open a RAW image, if one does not have the software to decode the format.

Due to the popularity of JPEG, it is accepted in most if not in all programs. It is also quite popular for web hosting of images, for amateur and average photographers, digital cameras, etc. This is again mainly due to the fact that high quality images can be saved using less space.

Comparison between RAW and JPEG: