Difference between Real Number and Integer 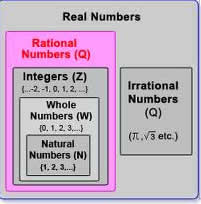 Real numbers consist of all rational as well as irrational numbers. Real numbers can be written in the decimal notation. They include even those that require an infinite decimal expansion. A real number refers to any number that can be found on the number line. The number line can be expressed as an actual geometric line where a point is chosen to be the origin. Points that fall in the right side of origin are considered as positive numbers, whereas numbers lying in the left side of origin are considered to be negative. Therefore, they consist of whole (0, 1 ,3 ,9, 26), rational (6/9, 78.98) and irrational numbers (square root of 3, pi). Infinity does not fall in the category of real numbers. Square root of -1 is also not a real number, and therefore it is referred to as an imaginary number.

Integers are types of whole numbers that are not in the form of fractions. Integers can be both positive and negative. Integers are actually subset of real numbers. It is important to mention that 0 is also included in the list of integers. Zero is considered to be neutral which means that it is neither negative nor positive. Study of integers is primarily done in the theory known as Number theory. Integers are basically used to represent the scenarios where whole numbers cannot be represented in mathematics. For example, bank accounts are associated with both adding and withdrawing of money. Integers are represented on the number line. Every number on the number line has a opposite number, except zero. Therefore, integers also include the opposite numbers in the list.

Comparison between Real Number and Integer:

hi this is a good guide