Key Difference: The Samsung Galaxy Tab 3 7.0 sports a 7-inch WSVGA TFT touchscreen and has the dimensions 188 x 111.1 x 9.9 mm, making the device thinner compared to the former tablet. The tablet is actually targeted for the low-end range. The Samsung Galaxy Note 8.0 aims at filling the gap between the Galaxy Note II and the Galaxy Note 10.1. The Galaxy Note 8 features an 8 inch TFT capacitive touchscreen with a resolution of 800 x 1280 pixels. The device is powered by a Quad-core 1.6 GHz Cortex-A9 and 2 GB of RAM. The device runs on Android OS, v4.1.2 (Jelly Bean).

Samsung announced the addition of a brand new 7-inch device to its tablet line-up. The device, dubbed Samsung Galaxy Tab 3 7.0 is the successor to the Galaxy Tab 2. If users were waiting on another high-end tablet from the makers of Galaxy S4, well it will be a huge disappointment. The tablet is actually targeted for the low-end range. The device does come with some upgrades compared to the Tab 2; but in terms of hardware, the device still lags behind the other mid-to-high range tablets.

The Samsung Galaxy Tab 3 7.0 sports a 7-inch WSVGA TFT touchscreen and has the dimensions 188 x 111.1 x 9.9 mm, making the device thinner compared to the former tablet. The screen has approximately 169 ppi density, giving it a decent resolution, but not the best available in the market. The company has styled the tablet after the S4 and the Galaxy Note, making it sleeker and more comfortable to hold. The device will be available in two models: Wi-Fi only and one with SIM support. The SIM model only support 2G and 3G functions. The Wi-Fi model will be available in the market as early as May 2013, while the GSM model will hit the markets in June.

The company has announced that the tablet will have a dual-core processor that will clock around 1.2 GHz and 1 GB RAM, which makes the device better in terms of speed compared to the Tab 2. The device will come with the company’s TouchWiz UX UI that was launched on the Galaxy S3 and will sport Android 4.1 Jelly Bean out of the box. The device offers ample amount of storage with 8/16 GB internal storage capacity, which can be boosted by 64 GB using a microSD card. One feature that might help increase sales of the device is the USB-capability, which is lacking feature in many tablets.

Galaxy Tab 3 will house a 3.15 MP autofocus rear camera and a 1.3 MP front camera for video calls. The cameras are not state-of-the art but they are decent enough for taking photos and video conferencing. The device does offer features such as geo-tagging and an LED flash. The device is powered by a non-removable Li-Ion 4000 mAh battery. Samsung has also integrated the phone with Google services, including Google Now. The device may not be for the users that are allowing for full-functional high-end tablet, but this is the perfect tablet for families that require a low-end tablet for internet browsing and gaming. 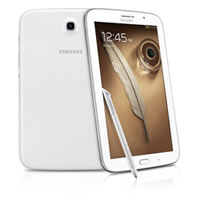 Samsung already has a popular phablet in the market, the Samsung Galaxy Note 8.0. A phablet is a cross between a phone and a tablet; it sized as a table but with all the properties of a phone. While, officially the Note 8 is considered a tablet, it does come with the optional SIM slot, thus allowing it calling and 3G capabilities.

The Galaxy Note 8 features an 8 inch TFT capacitive touchscreen with a resolution of 800 x 1280 pixels. The device is powered by a Quad-core 1.6 GHz Cortex-A9 and 2 GB of RAM. The device runs on Android OS, v4.1.2 (Jelly Bean). It is available with or without the support for a SIM and in 16 GB or 32 GB variants. In addition of the 16GB or 32 GB internal storage, the device hosts an external storage capacity of up to 64 GB. The device features a 5 MP primary camera with a 1.3 MP secondary primary camera.

In addition to the above mentioned features, the phone also boasts several features that are available on the Samsung Galaxy S4. This includes ‘Samsung WatchON’ that transforms the phone into an IR remote controller to connect to the home entertainment system; as well as ChatON, which allows the user to share the phone’s screen with other users. In addition the device also has a split screen capability that allows two or more applications to share the screen. These applications include email, messages, ‘MyFiles,’ ‘S Memo,’ ‘S Planner’, and more. The phone also has the popular ‘Air View’ feature, which allows users to preview information in emails, photos in Gallery, and speed dial contacts, before opening them.

The information for the detailed table about the two devices has been taken from Samsung Mobile Press website, Samsung website and GSMArena.com.