Difference between Tendonitis, Tendinosis, and Tendinopathy 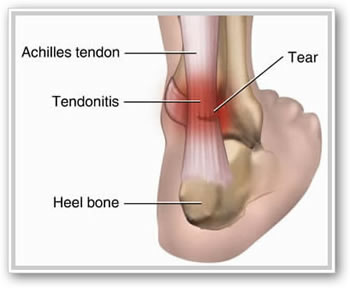 Tendonitis, Tendinosis, and Tendinopathy are different types of conditions that can affect a tendon. A tendon is tough, flexible, fibrous band of tissue, whose primary job is to connect muscles to bones. However, due to this the tendon also often tend to affect the impact when a muscle is overworked or if sudden pressure is exerted on the muscle, such as by picking up something heavy. This often results in damage to the tendon, which can develop into one of the three conditions.

Tendonitis, also commonly known as tendinitis, is an inflammation of the tendon. Tendinitis is a type of tendinopathy, which is a term that is generally used to refer to any type of injury or condition affecting the tendon. On the whole, tendonitis refers to any inflammation or irritation of a tendon. It is primarily caused by overuse of the tendon or by sudden force or impact to the tendon, such as by picking up something heavy. The situation is probably more aggravated by incorrect posture, poor stretching or conditioning before exercise, or by playing sports, all of which can help increase the risk of tendonitis.

The symptoms of tendonitis include pain in the tendon and in the affected region. The pain can be mild and build up, or be severe from the get go. The pain may especially flair up when moving the affected area. Another symptom could be frozen shoulder, which results in difficulty in motion, or complete loss of motion in the shoulder. However, tendonitis can affect any tendon, such as the one at the base of the thumb, in the elbow, shoulder, hip, knee, or in the Achilles tendon.

The primary course of treatment for tendonitis is to rest the area, avoid aggravating the area, and by icing it. One can also take over the counter anti-inflammatory drugs or pain killers. However, one should see a doctor is the tendon does not heal, if there is swelling, redness, or warmth in the area, if one has a fever, or if they cannot move the area. The doctor may choose to give corticosteroid injections to decrease the inflammation and pain, or may also recommend physical therapy or even surgery depending on the extent of the damage. 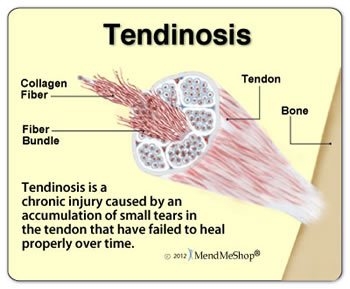 Tendinosis is similar in nature to tendonitis, so much so in fact that it is often mistakenly diagnosed at such. However, what distinguishes tendinosis from tendonitis is the fact that it is a chronic case of tendonitis. It does not heal over time as tendonitis would, and needs extra care and treatment. It is characterized by ‘degenerative changes in the collagenous matrix, hypercellularity, hypervascularity, and a lack of inflammatory cells’. Basically, this means that while tendonitis is caused by trauma or overuse, tendinosis is cause by a breakdown in the composition of the tendon. Hence, there is a very limited chance of recovery, instead the condition must be maintained rather than treated. The primary thing here it not to make the situation worse, at it can lead to the rupture of the tendon, which may require surgery.

The most common cause of tendinosis is due to tendon overuse. Hence, athletes or professionals whose job requires the overuse of certain tendons are often at the highest risk at developing tendinosis. For example, a tennis player may develop tennis elbow, or a person whose job requires them to type all day may develop tendinosis in their wrist. The course of treatment for tendinosis remains the same as tendonitis, which is to rest it, avoid aggravating it, and to ice. One can also take over the counter pain killers. If the injury is really bad then the doctor may suggest a splint, brace, or cast to hold the tendon still, or the patient may require surgery to deal with the affected tendon. 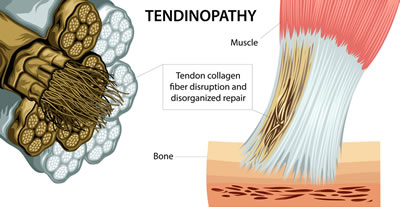 Tendinopathy, on the other hand, is different from the other two. It is an umbrella term that is used to refer to any disease that affects the tendon. It encapsulates various different diseases and conditions that may affect the tendon, such as but not limited to Tendinitis and Tendinosis. In the common usage of the term, it may also be used to refer to chronic tendon injury with no implication about etiology. Hence, it can be said that Tendinitis and Tendinosis are both sub-categories of tendinopathy. Due to this, tendinopathy shared its traits with either one of the two depending on the situation.

Comparison between Tendonitis, Tendinosis, and Tendinopathy: