Difference between Thorns, Spines, and Prickles 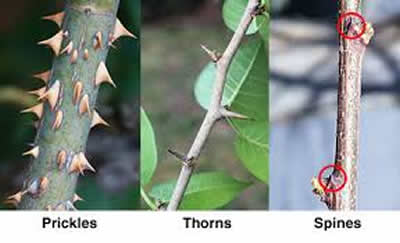 In common usage, thorns, spines and prickles are all considered to be the same recognised by their pointed structure. However, in context to plant morphology they tend to be different from each other.

Spines are formed as modified leaves which take the form of spines as the plant evolves. They replace the leaves of plants especially the ones which are living in dry conditions. It helps in reducing water loss. They are found on hawthorns.

Prickle is a small, sharp structure which is derived from the epidermis, which means it is developed from outgrowth of the surface of epidermis or bark. These are usually very easy to remove. Prickles help the plant in scrambling over some other type of vegetation. One common example is of roses which have prickles.

Therefore, one must not consider thorns, spines and prickles to be the same thing. Thorns are modified branches or stems. Spines are modified leaves and prickles are simply extension of the plant cortex and epidermis. Unlike spines, thorns are deeply seated and have connection with vascular tissues. Thorns are formed from deeply seated tissues of the plant. On the other hand, spines are formed from tissues present externally.

Spines and thorns are generally tough structures  with their own vascular supply. It is therefore difficult to break them off by hand. On the other hand, prickles are easy to break off by hand.

Comparison between Thorns vs Spines vs Prickles: