Key Difference: Toaster ovens are ovens that are small electric ovens that have a front door, removable wire rack and removable baking pan. These ovens are often larger than toasters, but smaller than conventional ovens. Electric ovens or stoves run on, well as the name suggests, electricity. It converts the electricity into heat in order to cook or bake.

Toaster ovens and electric ovens are two types of ovens that are available in the market. These ovens are different from each other and are used for different purposes. Toaster ovens are used for toasting, baking small cakes, small amount of cookies and various other products, while electric ovens are the big ovens that are found in kitchens and are used for basic cooking, baking, broiling and in general for feeding purposes. With the availability of new technology, many different types of stoves and ovens are available with the purpose of trying to make cooking easier, provide a much even heating, easier temperature control. However, when it comes to oven, cooking fanatics often decide based on a unit based on usage, type of cooking that is needed to be done, how the device cooks the food and the type of flavors that need to given to the food. 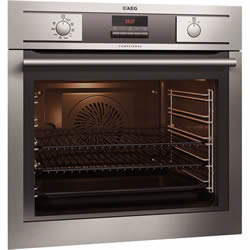 Toaster ovens can actually be considered as mini electric ovens. They are small ovens that also run on electricity. However, toaster ovens can limit the things that a person can cook because of their size. Also since toaster ovens are small, they can end up burning the food if kept on a high temperature. Toaster ovens use less power compared to electric ovens, this is also because of their size. They do not require a lot of energy to turn it into heat because of the small space. Toaster ovens are best when trying to toast bread or bread products, or heating up food in a small casserole dish. However, when it comes to baking meat, cooking properly or baking cakes, it is best to use the big oven.