Difference between Twister and Tornado

Key Difference: A tornado and a twister are the same thing. The term ‘twister’ is a slang term for a tornado.

Tornadoes are a natural calamity that is responsible for claming millions of lives and costing billions in property damage. A tornado is a rotating column of air that can have spinning winds up to 360mph and destroy everything in its path. Twisters are also a rotating column of air causing around the same amount of damage. So what exactly is the difference between the two? Well, twisters and tornadoes are exactly the same thing, and the term twister is ‘slang’ term for a tornado, derived from the twisting winds. 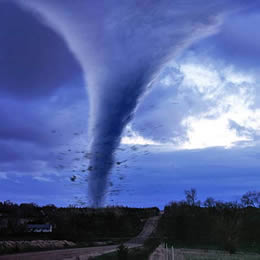 A tornado is a violent rotating column of air that is contact with both the ground as well as a cumulonimbus cloud. The base of a tornado that touches the earth is usually surrounded by a cloud of dust and debris, giving the tornado its color. Without the dust and debris, a tornado is transparent. A tornado or twister, depending on its size can have wind speeds between 40mph and 360mph.

Tornadoes often develop from a class of thunderstorms known as supercells. Supercells contain mesocyclones, an area of organized rotation a few miles up in the atmosphere, usually 2–10 km across. As the mesocyclone lowers to the base of the cloud, it begins to start taking in cool air from the downdraft region of the storm. The warm air in the updraft and the cool air in the downdraft form a wall of rotating air, forming the beginnings of a tornado. A tornado dies or dissipates when the downdraft encases the tornado and cuts off the warm air supply to the core, causing the vortex to weaken and eventually die.

Thank you so much for your explanation. Up until now I always thought the difference between a tornado and a twister lies in geography, in other words I thought twister is an American term for tornado. Thank you for your clarification.