Wax paper is also known as paraffin paper is a moisture-proof paper that is coated with a layer of wax to make it moisture-proof. Earlier versions of such papers have existed since the medieval times, when parchments were oiled in order to make it water proof and carry valuables that could not be exposed to constant moisture. The wax paper was introduced in 1851 by Gustave Le Gray for wrapping photographic negatives. Wax paper can be used to cover liquids when heating in the microwave oven, as microwaves do not affect wax paper.

Wax paper is used in various applications around the house. These are good to warp objects that can become soft and moist if left opened to air exposure such as cookies, chips, etc. These are also perfect for wrapping, storage or shipping as it ensures the no moisture or air will go through the paper. Wax paper can also be used for arts and crafts as well as in sewing for tracing purposes. Wax paper is developed by putting paper through supercalendaring, after which a layer of soybean or paraffin wax is added to the paper. Though it is useful in everyday, it has been criticized as waxing paper cannot be recycled and synthetic additives such as petroleum makes the paper non-biodegradable. 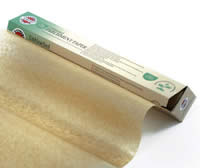 Baking paper, also known as parchment paper, is a cellulose-based paper that is used mainly in baking as a substitute for greasing. The baking paper performs the same job as greasing a pan in order to keep the food from sticking to it directly. This is a less messy form of it and can be discarded after use. Baking paper can resist high amounts of heat and can be used as a replacement for wax paper, as wax paper melts when exposed to high amounts of heat. Baking paper can also be used to wrap and store foods. In addition to these, the paper can also be used to prepare foods that require steaming such as en papillote.

Parchment paper is created by running sheets of paper pulp through a bath of sulfuric acid. This process partially dissolves or gelatinizes the paper, after which the paper is dried. The treatment with sulfuric oxide forms a sulfurized cross-linked material with high density, stability, and heat resistance, and low surface energy, making the paper non-sticky. The paper also passes through a few rotating drums, which further strengthens the paper. Finally the paper is coated with silicone to make it sustain high temperatures.