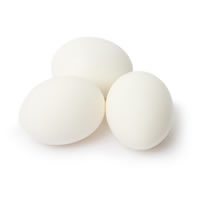 There are a large variety of chicken breeds. White chickens, such as the white leghorn, tend to lay white eggs. On the other hand, brown chickens, such as the Rhode Island Red, the New Hampshire and the Plymouth Rock, tend to lay brown eggs or brown-spotted eggs. The brown chickens are affected by genetics, which give their eggs an additional layer of coloring on the external portion of the egg. The egg starts out white, but due to the additionally coloring, they tend to have a brown appearance in the latter stage of egg formation.

According to the University of Pennsylvania, there are no differences between the nutritional content of the brown and white eggs. One large egg, despite of its color, includes 72 calories, 6.29 grams of protein, 4.97 grams of fat, 212 mg of cholesterol and 125.5 mg of choline. Eggs also tend to contain significant amounts of vitamins A, D, E, B-6, B-12, folate, thiamine, riboflavin, calcium, potassium, phosphorus, magnesium, iron and zinc. Furthermore, there is no evidence to suggest that there is any detectable difference

between taste and quality.

Still, many tend to prefer one type of egg to the other. Mainly, because they still believe that brown eggs are healthier. This used to be the case once. Originally, brown eggs were considered to be organic, as the brown chickens were raised by farms and were fed with healthier and organic food, and had plenty of space to roam. Whereas, white eggs were factory produced, i.e. from chickens who were raised and fed in a commercial poultry farm. Over the years, these commercial poultry farms also acquired brown chickens and started selling brown supposedly “healthier” eggs. However, as the conditions of these newly acquired brown chickens were the same as the white chickens, hence there were absolutely no differences between the two types of eggs.

Still, the myth endured and many people nowadays still consider brown eggs to be healthier than white. Furthermore, there are varieties of different reasons why people may prefer on over the other, such as white eggs tend to look clean and fresher than brown eggs. Another reason some claim is that it is easier to differentiate the brown shell when it falls into the food while being prepared. Many don’t even tend to think that much about their preference, its just they have always eaten white eggs, so they stick to white eggs. Whereas, many have just gotten used to brown eggs and they have just never considered switching back to white eggs.

In addition to the nutrition factor, there are many myths between brown eggs and white eggs, including that the shells of brown eggs are harder than the shells of white eggs or that the yolk of a brown egg is more richly colored than a white egg’s. However, there has been no evidence to support these claims. What's true is that younger chickens lay eggs with harder shells, while the type of feed that chickens eat can vary the color of the yolk. These variances have nothing to do with the color of the egg’s shell.