Key Difference:  ROM stands for Read Only Memory. This is a non-volatile type of memory which is found in computers and other electronics devices. It is used for storing data permanently. Some of the common types of ROM include – Mask ROM, PROM, EPROM and EEPROM.

ROM stands for Read-only memory. It is a type of memory storage used in computers and other electronic devices. It holds data permanently. Like RAM, ROM is also based on random access model of memory which means that time taken to access the memory is independent of the address of the word at the memory. This type of memory cannot be modified by the computer but it can be read and therefore it is known as the read only memory. It keeps the bootstrap program which runs on it own when the system is turned on or reset every time.

Some of the common types of ROM are – 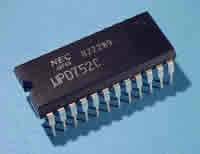 Mask ROM – It is also known as MROM. It is a static ROM which comes programmed into an integrated circuit by its manufacturer. The software mask is burned into the chip and that is why it is termed as Mask ROM. Network operating systems and server operating systems make use of this type of Mask ROM chips.

PROM –It stands for Programmable Read Only Memory. It was first developed in 70s by Texas Instruments. It is made as a blank memory. A PROM programmer or PROM burner is required in order to write data onto a PROM chip. The data stored in it cannot be modified and therefore it is also known as one time programmable device. 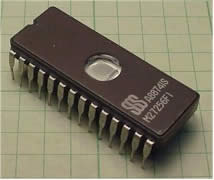 EPROM – It stands for Erasable Programmable ROM. It is different from PROM as unlike PROM the program can be written on it more than once. This comes as the solution to the problem faced by PROM. The bits of memory come back to 1, when ultra violet rays of some specific wavelength falls into its chip’s glass panel. The fuses are reconstituted and thus new things can be written on the memory. 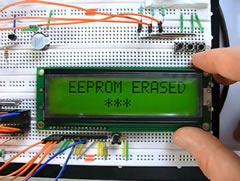 EEPROM- It stands for Electrically Erasable Read Only Memory. These are also erasable like EPROM, but the same work of erasing is performed with electric current. Thus, it provides the ease of erasing it even if the memory is positioned in the computer. It stores computer system’s BIOS. Unlike EPROM, the entire chip does not have to be erased for changing some portion of it. Thus, it even gets rid of some biggest challenges faced by using EPROMs. 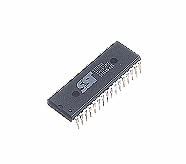 FLASH ROM– It is an updated version of EEPROM. In EEPROM, it is not possible to alter many memory locations at the same time. However, Flash memory provides this advantage over the EEPROM by enabling this feature of altering many locations simultaneously. It was invented by Toshiba and got its name from it capability of deleting a block of data in a flash.

Sir please tell about its features like changeable or overlaping

Liam, Thanks for taking interest in this article. We have made the necessary changes.