Key difference: Android is a Linux-based operating system owned and operated by the Open Handset Alliance, a consortium of 84 leading firms, lead in part by Google. Android 4.1, also nicknamed Jelly Bean, was released at the Google I/O conference on 27 June 2012. It is based on Linux kernel 3.0.31. It was the successor of Android 4.0 (Ice Cream Sandwich) and offers some significant upgrades to the Android operating system. Android 4.2 was launched on 29 October 2012, and was a minor update to Android 4.1 Jelly Bean. Thus, Android 4.2 was also named Jelly Bean. It was launched on and with two Nexus devices: Nexus 4 and Nexus 10. Android 4.2 is a combination of Android 4.0 (Ice Cream Sandwich) and Android 3.0 (Honeycomb). 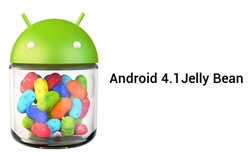 A number of these companies’ smartphones and tablets run on Android. Android is an open source software, which means that the code is freely available under the Apache License for modification and distribution by device manufacturers, wireless carriers and enthusiast developers. Android was first unveiled in 2007 and the first phone running on Android, HTC Dream, was sold in October 2008.

As the Android is an open source software, manufacturers can modify the operating system to suit their respective needs and phones. This becomes a cheap and feasible alternative for the manufacturer, as opposed to developing an operating system in-house or hiring a software company to do it.

According to Android’s official blog, at the end of September 2012, there were 675,000 apps and games available in Google Play, and the estimated number of applications downloaded was 25 billion.

Android 4.1, also nicknamed Jelly Bean, was released at the Google I/O conference on 27 June 2012. It is based on Linux kernel 3.0.31. It was the successor of Android 4.0 (Ice Cream Sandwich) and offers some significant upgrades to the Android operating system.

As opposed to Ice Cream Sandwich, Jelly Bean was quicker to respond to touch. It introduced the concept of extending vsync timing across the user interface (UI). The upstart of this is that with the added CPU input boost, it ensures that there is no sluggishness or less responsiveness after a period of inactivity.

Android 4.1 also allows for any application to display expandable notifications. These notifications have support for photos and dynamic content. The browser in Android 4.1 was also improved over the previous version. Jelly Bean also has added language support that enables more languages for it to be displayed in.

An interesting addition to Android 4.1’s stock applications was Google Now. Google Now is pretty much a personal digital assistant, much like Apple’s Siri. Google Now is a learning application which adapts to the user’s habits and displays relevant information as cards. For example: while traveling, the app will show any and all local sites and eating joints one can visit, as well as the local time and relevant exchange rates. It will also volunteer to assist in reserving travel and living accommodations. This is all in addition to working as Siri.

As opposed to the previous Android 4.1, Android 4.2 introduced some minor changes to the software, including multi user capability. The multi user capability allows a family to share a tablet by creating their own user accounts on the device and customizing the tablet to each account. Furthermore, the user need not log in and log off to switch accounts. They may do so simply and seamlessly from the lockscreen.

Android 4.2 also introduced a new virtual keyboard that can make use of gesture typing, improved speech to text ability that is available offline as well and the Photo Sphere. Photo Sphere is a new addition to the camera that allows one to take 360 deg Panorama shots, as well as share these photos on Google + or add them in Google Maps.

Furthermore, Google has added a component called Daydream that displays useful or creative information when the device is idle, charging or docked. This includes the latest Google Currents trends, a photo slideshow, a photo frame, an analog or digital clock, or a colorful background or screensaver. Daydream is essentially a customizable screensaver. It can also be manually activated. 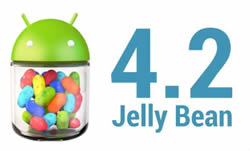 Google Now has also been improved; it can now indicate photogenic spots nearby and track packages easily. The widgets have also been improved; they can automatically resize depending on the components added to a screen. The screen, itself, can be magnified using three tap gestures. Visually impaired users can now interact with the fully zoomed screen, including typing when zoomed in. The gesture mode in Android 4.2 enables seamless navigation through the smartphone for blind users along with the speech output.

Android 4.2 also has a new feature due to Miracast, which allows the device to stream its screen wirelessly to an HDMI device, such as HDTV, that supports the Miracast standard. This will allow the user to stream slideshows, movies, videos, and such, on to a bigger screen. However, not all phones support this feature at the moment.

Additional changes or improvement to Android 4.2, include: