Difference between BBM and WhatsApp

Key Difference: BBM or Blackberry Messenger is a proprietary Internet based instant messenger as well as a video telephone application developed by BlackBerry Limited.  WhatsApp Messenger is also a proprietary instant messenger subscription service for smartphones with internet access. BBM and WhatsApp differ in some of their features. However, both are popular messengers and it depends upon the individual’s choice to prefer one on the another. 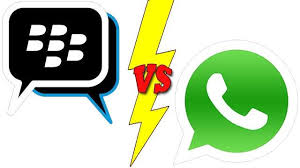 Blackberry is a famous instant messenger program from BlackBerry Limited. It connects a BlackBerry to another Blackberry device by utilizing a code. It is free to use and simply makes used of data from user’s data plan. The messenger can be easily downloaded from the internet for Blackberry smartphones. However, now it is also available for iPhone and Android. It provides numerous features like chating, sharing of content while using the application. It allows the users to send, receive and read while getting live confirmation. One can share music files, videos and images between various contacts at the same time.

The user must obtain the contact’s PIN number to start communicating with that person via BBM. In the release of BlackBerry Messenger 5.0, a user can also use QR Code to add each other to their respective friend’s lists rather than using PIN identification or an email address associated with the user's BlackBerry device. According to Wikipedia there are 70 million BBM users worldwide and BlackBerry infrastructure handled 30 petabytes of data traffic each month by early 2013.

WhatsApp is a proprietary instant messaging service designed for internet enabled smartphones. It has gained a lot of popularity due to its cross platform messaging subscription service. It is free to send and receive messages and media over WhatsApp. The only requirement for it to be working is to have an adequate internet data plan and a current subscription in WhatsApp.

It was founded by the former employees of Yahoo, Brian Acton and Ukrainian Jan Koum in 2009.  After being installed, it creates an account of the user on the basis of user’s phone number as username. It is a popular messenger for smartphones. On Feb 2014, Facebook has made an announcement regarding acquisition of WhatsApp.

BBM and WhatsApp are similar in many ways – both allow group chats and broadcasts. Both provide the feature of blocking contacts. Blackberry is free, whereas WhatsApp is free for 1 year and after than it charges 0.99 USD per year. Earlier BBM’s limited functionality for BlackBerry smartphones was considered to be a major disadvantage for it. However, with its release for Android and other smartphones, it has quiet come in par with the WhatsApp. WhatsApp means of communication can be regarded to be more open as it can be accessed with any mobile dataplan or over wi-fi. BBM makes use of BBM pins for connecting people, whereas WhatsApp uses mobile phone numbers of the user and get access to user contacts automatically. Blackberry Messenger (BlackBerry 10 smartphones) allows video calls. However, this feature is missing in WhatsApp in spite of being capable of sharing video files back and forth. WhatsApp provides a good selection of preset status messages. On the other hand, BBM profiles provide features like linking to apps, etc.

Therefore, both are impressive messengers, and it depends upon the individual’s choice to prefer one on the another.

Comparison between BlackBerry Messenger and WhatsApp: