Difference between Binary Fission and Fragmentation

Key Difference: In biology, Binary Fission and Fragmentation, both are known as forms of 'asexual reproduction'. Binary fission is the splitting of one cell into two, and while conjunction is the same, it also involves exchanging DNA between two organisms. Fragmentation is the process of breaking off a piece of organism followed by mitosis cell division. 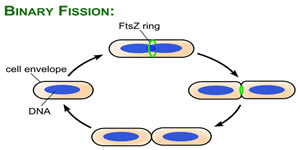 In biology, fission is the subdivision of a cell or a multi-cellular body into one or more parts and the regeneration of each of the parts into a complete individual. It is a simple mitotic division in which each new cell receives half of the cytoplasm of the original cell. The line of cytoplasmic may be either miscellaneous or longitudinal. Examples include Protista, Monera, etc. Binary fission produces two split cells, populations, species, etc., whereas, multiple fission produces more than two cells, populations, species, etc. Prokaryotic fission, which is binary fission, is a form of asexual reproduction and cell division used by all prokaryotes. 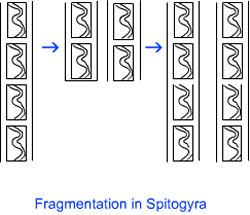 Fragmentation may also be used in some other contexts such as music, technology, science, economy, sociology, etc.

Comparison between Binary Fission and Fragmentation:

I love this website as it always gives me the most relevant diffrence and that too a lot of them....thnx!