Key Difference: DDR (DDR1), DDR2 and DDR3 are different types of SDRAM that are used in computers. DDR2 provides a faster transfer rate, bus clock and is more power-friendly compared to DDR1. DDR3 is an advanced version of the same technology. It enables faster bus speeds and higher peak throughput than earlier memory technologies. All three memories differ in various contexts like technical and physical specifications.

RAM or random access memory is an important part of a computer as it serves the role of a short term memory. The memory provides the facility to store the data on a temporary basis. RAM is versatile in terms of versions and speeds. One needs to understand the difference between the various types of RAM, otherwise the compatibility issues may arise between the computer and the RAM. 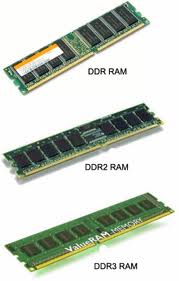 DDR or DDR1 falls in the category of first generation evolving from the SDRAM technology. The enhancements of prefetching, double transition clocking, strobe based data bus, and Stub-Series Terminated Logic_2 (SSTL_2) low-voltage signaling, etc. were made in the original technology to create DDR1.

DDR2 falls in the second generation and can be seen as a successor to DDR1. It is capable of providing data rates upto 6.4 GB/s. It is known for providing lower consumption in comparison to DDR1. Due to faster clocks, 1.8-V operation and signaling, along with a simplified command set, DDR2 has improved performance over its predecessor.

DDR3 (third generation of DDR SDRAM) is a further improved version of DDR2. It has specifically improved in bandwidth and power consumption. DDR3 operates at clock rates from 400 MHz to 1066 MHz with theoretical peak bandwidths ranging from 6.40 GB/s to 17 GB/s. The DDR3 standard allows chip capacities of 512 megabits to 16 gigabits.

DDR1 has become obsolete, therefore it is not produced in a massive scale today. DDR2 and DDR3 are being preferred for better performances.