Key difference: HTC First is the first phone that will be released running on the Facebook Home user interface. The phone will be powered by a Qualcomm MSM8930 Snapdragon 400 1.4 GHz Dual-core Krait and a 1 GB of RAM. The Nokia Lumia 820 was one of the first phones to be developed running on Windows Phone 8. It was launched in November 2012, as a slightly cheaper alternative to the Nokia 920. It has a 4.3 inch display with a resolution of 480 x 800 pixels. It is powered by a Qualcomm MSM8960 Snapdragon Dual-core 1.5 GHz Krait processor and a 1 GB RAM. 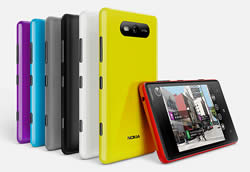 One of the first smartphones under the brand is the Nokia Lumia 820. The Nokia Lumia 820 was first of the first phones to be developed running on Windows Phone 8. It was launched in November 2012, as a slightly cheaper alternative to the Nokia Lumia 920. It has a 4.3 inch display with a resolution of 480 x 800 pixels. It is powered by a Qualcomm MSM8960 Snapdragon Dual-core 1.5 GHz Krait processor and a 1 GB RAM. The phone has 8 GB internal memory and an external memory expandable up to 64 GB.

The information for the detailed table about the two phones has been taken from the HTC website, the Nokia website, cnet.co.uk, theverge.com and GSMArena.com.