Difference between Ice Skating and Rollerblading

Key difference: Ice skating is moving on a surface of ice, by using a pair of ice skates. Rollerblading is the term coined for inline skating, which is practiced on ice, race tracks, skate parks, residential localities, etc. 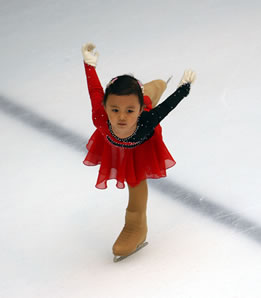 Ice skating, as the name suggests, is executed by sliding around a surface made of ice, using a pair of ice skates. Ice skating is performed on a variety of surfaces. Ice skating occurs on naturally frozen rivers, lakes and other water bodies. Besides this, ice skating is also done on artificially constructed ice tracks, both indoor and outdoor. These skates are very different in make from the conventional roller skates. The roller skates have a pair of rollers attached to its base, but the ice skates come attached with a blade at the bottom. The provision of blades at the bottom is to facilitate grip and comfort to the skater, while skating on ice.

Ice skating was recognized as a sport back in the year 1876. Since then, the sport has evolved into various popular forms, which are practiced widely by people all over the world. Some of the prominent spin-offs that ice skating is often credited with are: ice dancing, figure skating, ice hockey, bandy, etc. In fact, ice skating is not only looked at as a winter sporting requisite, but is also taken up as a hobby, leisure activity, a medium of traveling on ice, or even as an exercise. Ice skating and its associated events also play a major part in the Winter Olympic Games, which are held at an interval of every two years from the Summer Olympic Games. 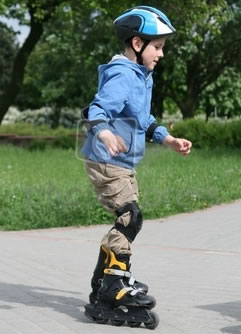 Rollerblading is a name given to the practice of inline skating. The reason for this is the skates manufactured by the popular brand, Rollerblade. These skates when introduced were the first of its kind that replaced the traditional rollers with inline polyurethane wheels. These skates usually have two to five wheels, arranged in a single line, which is why these skates are also known as inline skates. Because Rollerblade came up with this innovation and made it available to the masses on a large scale, these skates were fondly known among the people as rollerblades. Inevitably, the sport of inline skating itself came to be known as rollerblading.

Some of the disciplines of inline skating or rollerblading are: vert skating, freestyle skating, off-road skating, speed skating, etc. These styles involve high speed racing, tricks, spins and flips galore. Additionally, this sport can be conducted on rough terrains such as roads, off roads, skating parks, race tracks, urban localities, etc. Essentially, this sport is highly aggressive, intense and fast in nature. Part of the reason for it being so, comes from the fact that it makes use of inline skates, which are fitted with wheels, thereby making it easier and faster to skate on any kind of surface. These skates allow a higher degree of speed and mobility, along with providing comfort as well. Which is why, an action-packed game such as ice hockey, has rollerblading or inline skating as its fundamental concept. Like ice skating, inline skating and its related events also feature handsomely at the winter editions of Olympic Games.

Comparison between Ice Skating and Rollerblading: