Difference between Income and Revenue

Key difference: Revenue is the amount earned from a company’s main activities such as selling merchandise or providing services. Income is the money left for a business after it subtracts costs and expenses from its revenue. 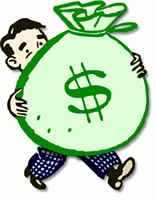 Revenue and income are quite commonly used interchangeably. However, this is wrong; revenue and income are two different words that mean something quite different. Revenue is the amount earned from a company’s main activities such as sales. Income, on the other hand, is the money left for a business after it subtracts its costs and expenses from the revenue.

In business, the revenue is the income that a company receives from its normal business activities. This is usually the sale of goods and services to customers. It is the total amount of money that a business earns by doing its day to day activities. This is usually called direct revenue. Revenue can also be indirect, which can be earned by means of investments. In some countries, revenue is also known as turnover.

Income, on the other hand, it the money left for a business after it subtracts costs and expenses from its revenue. It is the ‘profit’ or ‘net profit’ that the company has after its costs of doing business are deducted from its sales. There are many types of costs, such as fixed and variable costs, direct and indirect costs, and lastly, product and period costs.

The concept of revenue and income is mainly employed or applicable for companies or corporations. From a salaried person’s point of view, income and revenue are basically the same. When a person receives a salary, usually companies and governments automatically deduct the taxes and benefit payments. Hence, what the employee receives, his revenue for services provided, is the same as his income, i.e. after the deduction of taxes. However, one could also claim that costs would also include traveling charges, office lunches, etc. which should be deducted from the salary, i.e. revenue, to get the actual income. Nonetheless, this is a person opinion of each.