Difference between Kwashiorkor and Marasmus 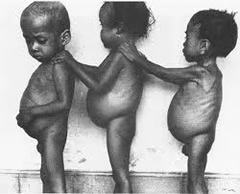 Kwashiorkor and Marasmus both fall in category of malnutrition. Malnutrition is a serious condition occurred due to insufficient intake of nutrients in the diet. The word Kwashiorkor comes from an African word meaning “first child – second child.” Kwashiorkor is a kind of malnutrition that is most often found in children. It is primarily caused due to insufficient intake of proteins. However, it do not have any relation with the amount of calories intake i.e. may be a person is having a high calorie food but specifically less proteins then in that case the person is prone to Kwashiorkor. This kind of malnutrition is primarily found in developing countries. Due to poverty, children are deprived of the necessary proteins in diet and therefore suffer from malnutrition like kwashiorkor. It stunts growth and children tend to have bloated bellies and thin arms and legs. Kwashiorkor is also known by names like protein malnutrition, protein-calorie malnutrition or malignant malnutrition. It is very rare in children of developed countries like the United States of America.

Marasmus is also a kind of malnutrition that occurs due to deficiency of proteins, 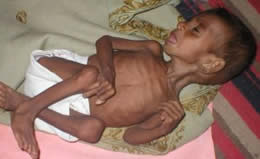 carbohydrates and fats in the diet. In marasmus the child consumes little or no food leading to minimal caloric intake and also a total lack of nutrients. It is also caused due to metabolic and genetic problems which make the body incapable of absorbing the necessary nutrients. Due to lack of nutrients, the body starts consuming own tissues, fats and muscle. Breast feeding helps in preventing the disease. It mainly affects children who are weaned away from mother’s milk.

How do odema occur in the patients with marasmus!?

Thanks. It is a very helpful article

why did marasmus happen