Difference between Moped and Scooter

Key Difference:   Mopeds and scooters are generally associated with restricted types of motorcycles. Mopeds have a small engine with less power capacity than that of scooters. They both are also quite different in appearance. 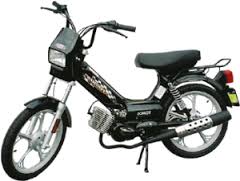 Mopeds and scooters are popular two wheelers, however many people are not able to describe the exact differences between the two. Earlier, mopeds were more like a bicycle with pedals, and therefore it got its name from motor+pedal. However, currently it refers to a light version of a motorcycle. Scooter is also a type of two-wheeler, but still moped and scooters are different from each other. The main difference between them is related to motor. A moped’s motor is comparatively smaller than that of the scooter. In appearance, a moped resembles a bicycle. It is able to achieve 30 to 35 miles per hour of speed.

These bicycle types’ mopeds have a build in motor. The mopeds have a maximum placement up to 49 cc. However, some variation may exist in these data varying from country to country. In some places, the term is used to a similar light version of motorcycle which is a three-wheeled device but with similar technical specs. Its motor produces less than two gross brake horsepower. 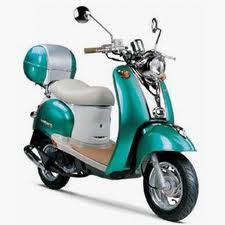 Scooter is also a lighter version of motorcycle.  In appearance, one can easily state that a scooter is definitely larger than moped. Additionally, a scooter possesses a platform so that operator’s feet can rest on it.

Scooters are different from mopeds primarily on the size of motor and its power. Scooters have a big motor than in comparison to mopeds, with power of generally between 50 cc to 150 cc. Scooters are faster than in comparison to mopeds. The permission of mopeds to get into the highways may or may not be permitted, but scooters are usually provided with this permission. Therefore, the size of engine and power are two key distinction points for moped and scooter. A three wheeled scooter also exists with two front wheels which provides a similar tilting mechanism like that of a motorcycle.

The term motorized scooter is also used sometimes for a vehicle that does not possess more than three wheels and do not contain any seat or saddle for the rider. Its speed is also not described as greater than 30 miles per hour. The minimum age for licensing, safety requirements, number of riders, etc. all these attributes differ from countries to county.

Comparison between Moped and Scooter: