Difference between Multiplexer and Encoder

Multiplexer and encoder both are very important for the digital electronics. They are types of combinational logic circuits. The difference between them may be due to some confusion, as encoder is also considered to be a kind of multiplexer. Thus, it is important to find out the characteristics of both which will help in differentiating between them. 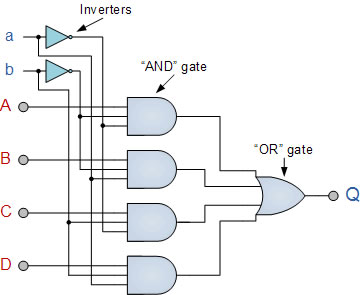 Multiplexers are also used in communications; the telephone network can be understood as very large virtual multiplexer that consists of many smaller discrete ones. It is not possible to have a direct link between one phone and the other, therefore, the network uses multiplexing and converts individual telephone signals onto one of a small number of wires as calls are placed. At the receiving end, demultiplexer is present and that chooses the right destination among many.

information from 2^n inputs to n outputs. The encoder is used for purposes like standardization, speed, secrecy, security, or saving space by shrinking size. When a bit comes in on an input wire, the encoder outputs the physical address of that wire. It takes 2^n inputs and gives out n outputs; the enable pin should be kept 1 for enabling the circuit. Examples of Encoders are following:-

An encoder is a device that can be used to change a signal (such as a bitstream) or data into a specific code. The code may be used for any purpose like, for the compression of information required for transmission and storage, for encryption or for adding redundancies to the input code.

Is it possible to convert a multiplexer into an encoder or vice versa? How?