Difference between Nintendo Wii and Xbox 360

Key difference: Nintendo Wii and Xbox 360 are game consoles, which are produced and developed by Nintendo and Microsoft companies, respectively.

Nintendo Wii is a Nintendo family video game console. The Nintendo Wii system is a compact system with external hardware like the Wii Remote controller. It has an advanced and built-in gaming system, with external hardware development connections. It was introduced in the market on November 19, 2006. The Wii console is the fifth major home console. The systems design and structure focuses more on the demographic features of the game.

The Nintendo Wii is a stand-alone vertical system and consists of extra hardware features. The system need to be connected externally to the television, and this enables the players or gamers to play the motion games on the big screen of television. For insertion of the game, there is a large slot on the front of the system surrounded by a glowing blue neon light. This slot can accept the 8 cm discs used by the Nintendo Game Cube and the standard 12 cm discs of Wii games. The hardware construction also consists of an external motion sensing Wii Remote controller. The controller detects the movement in three dimensions as it works on motion sensing technology. Nintendo Wii can be connected to Nintendo DS via wireless connectivity, which enables the players to use the Nintendo DS microphone and touch screen as inputs for Wii games. A pre-defined service application, known as the “Virtual Console”, helps in downloading the latest and updated online games available in the market. These services feature emulated games from the past systems. WiiConnect24 is also one of the notable features of the Wii system, which updates the system even in the standby mode, when connected over the Internet. 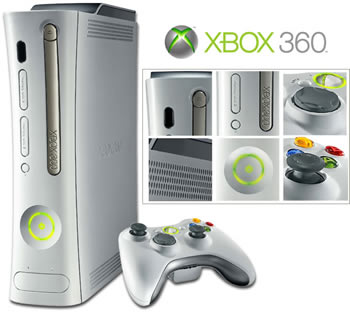 The Xbox 360 is a Microsoft developed video game console. It is the successor of the original Xbox, and the second console of the Xbox series. It was released in the market in the year 2005. It is one among the typical seventh generation gaming consoles.

Xbox 360 comprises of a huge set of hardware and processor units; they are: Custom IBM Power PC-based CPU with three 3.2 GHz cores, Custom ATI graphics processor with 10 MB embedded DRAM, 512 MB 700 MHz GDDR3 RAM, Detachable and upgradeable hard drive, which accepts all models except the Core system 12x dual-layer DVD-ROM. The Kinect is a controller-free gaming hardware which is generally connected to the Xbox 360, while playing games. The system can support four wireless game controllers at a time. It comprises of three USB 2.0 ports and two memory unit slots.  Xbox 360 like all other video game consoles supports the computer software and hardware processing components. The Xbox 360 is a special packaged computer, which uses the triple-core IBM designed Xenon as its CPU. The console includes both wired and wireless controllers, which facilitates various gaming activities.

Comparison between Nintendo Wii and Xbox 360: