Difference between Puma and Cheetah

Key difference: Puma and Cheetah are totally different big cats. Puma is large, slender cat with a small head. The puma is predominantly light brown, though individuals vary from gray to reddish-brown. On the other hand, Cheetah is a smaller size, spotted coats, small heads, ears and distinctive "tear stripes" that stretches from the corner of the eye to the side of the nose. 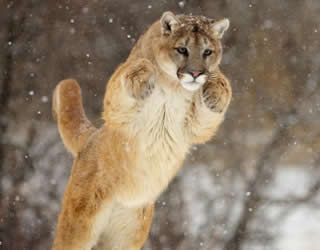 Puma is also known as a cougar or a mountain lion. They are huge wild cats, and run at huge speeds. It is usually tan colored, and they are 9ft tall. They are mainly seen at places such as the west coast of Canada, in the western half of the United States, including Alaska and Florida, and most of Central and South America. The puma is a nocturnal hunter and hunts a large variety of prey, from deer and moose, to cattle, horses and even rodents. The Pumas is the largest of all the small cats, and have a recognizable facial characteristic of a black ring reaching from the corners of the mouth and around the nose.

The Puma is a solitary animal with the exception of the time cubs spend with their mother. The Puma is a large and powerful carnivore, hunting and eating only other animals in order to survive. It is one of the most dominant predators throughout much of their natural environment and is therefore rarely preyed upon by other species. 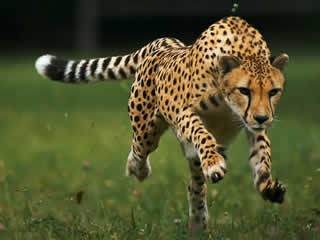 A cheetah will carry its kill to a solitary hidden location to save the kill from other animals. Cheetah is the fastest land animal in the world. Cheetahs have been known to depend on their bursts of speed in order to hunt down victims. Cheetahs can go from 0-60 miles per hour in three seconds. Cheetahs are tan in color with black spots all over their bodies. They can also be distinguished from other big cats by their smaller size, spotted coats, small heads, ears and distinctive "tear stripes" that stretch from the corner of the eye to the side of the nose. They hunt during the day and rely on bursts of speed (up to 75mph over short distances). Unlike leopards and other big cats, they can purr while they inhale, but can't roar.

Comparison between Puma and Cheetah:

so who would win